“Comedienne” Michelle Wolf Outdoes Herself With Tribute to Abortion 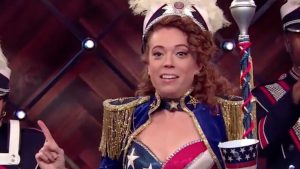 In lieu of actually being funny, Michelle Wolf seems to have decided to just commit fully to being disgusting.

The “comedienne” who shocked the nation with her equally tasteless and un-funny routine at the White House Correspondent’s Dinner earlier this year, believe it or not, has her very own show on Netflix.

And yes, it’s pretty much just a long-form version of her terrible stand-up.

Now, most progressives are totally freaking out at the thought of Trump’s new Supreme Court pick allowing the court to finally overturn the unconstitutional Roe v. Wade (woohoo!), which is causing them to show their true colors: they just love them some abortion, and Wolf is clearly at the top of the list, urging viewers on her show this week to embrace abortion in the form of an actual tribute to the practice of ripping unborn children from their mother’s wombs.

“Look, access to abortion is good and important. Some people say abortion is ‘killing a baby.’ It’s not. It’s stopping a baby from happening. It’s like ‘Back to the Future’ and abortion is the DeLorean. And everyone loves DeLoreans,” she said, according to The Daily Wire.

Then Wolf targeted the pro-life movement with more rancid language, asserting, “Pro-life is a propaganda term that isn’t real, like healthy ice cream and handsome testicles,” and adding “anti-abortion” really meant “anti-woman … If these people were actually pro-life, they would be fighting hard for healthcare, child care, education, gun control, and protecting the environment.”

Wolf continued, “These days, abortion providers have been terrorized by the Right into downplaying their abortion services. You should be proud of it. You’re doing a good thing.”

Wolf, whose show is in its first year, concluded the segment with her “10th Annual Salute to Abortions,” accompanied by a marching band, a balloon arch, and with her dressed in a patriotic costume. As “You’re a Grand Old Flag” played, she intoned, “Abortion I salute you. Women if you need an abortion, get one,” then tossed confetti as she asserted, “God bless abortions and God bless America.”

You can observe this trainwreck of morality for yourself below: