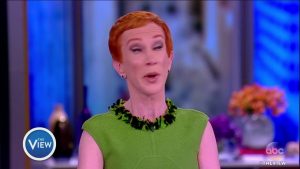 During election night, alleged comedian Kathy Griffin — “alleged” because I’ve yet to see any sort of evidence supporting the claim she’s funny — once again proved she’s a classless liberal hack by retweeting the infamous picture of herself holding up a severed head meant to look like President Trump.

The first time she posted this it derailed her already sinking career. Guess she doesn’t really learn does she?

Griffin initially posted the photo in May 2017, triggering a firestorm of criticism. Even CNN management ripped her; a spokesperson for the company stated, “We found what she did disgusting and offensive. We are pleased to see she has apologized and asked that the photos be taken down. We are evaluating New Year’s Eve and have made no decisions at this point.”

In June of 2017, Dmitry Gorin, the criminal defense attorney who represented Griffin, stated at a news conference, “She basically exercised her First Amendment rights to tell a joke. When you look at everything in the media, all the times entertainers make videos or express themselves in other ways, you’ve never seen an entertainer, let alone a comedian, be subject to a criminal investigation.”

“I don’t think I will have a career after this. I’m going to be honest. He broke me,” but insisted she reserved the right to continue to mock Trump, adding, “I’m not afraid of Donald Trump. He’s a bully. I’ve dealt with older white guys trying to keep me down my whole life, my whole career,” Griffin whined with a few crocodile tears for good measure.

Secret Service agents actually interviewed Griffin over the photograph. By the time August of 2017 rolled around, she was not at all sorry for what she did.

Griffin: Correct. I’m no longer sorry. The whole outrage was B.S. The whole thing got so blown out of proportion. And I lost everybody; I had Chelsea Clinton tweeting against me. I had friends, Debra Messing, from Will and Grace, tweeting against me. I mean, I lost everybody. And so I have been through the mill, I also, I didn’t just lose like, one night on CNN; my entire tour was canceled within 24 hours because every single theater got all these death threats. I mean, these Trump fans; they’re hard-core. They have, like, robocalls, and they’re a minority, but they know how to act like they’re a majority.

Armytage then pointed out that it wasn’t only Trump fans who had a problem with the photograph.

“Debra Messing and Chelsea Clinton aren’t Trump fans; even Democrats said it was out of line. I get that comedy is about pushing the boundary, and being politically incorrect and that’s fine. But do you not agree that that picture, holding up a severed head, I know it’s a mask, covered in tomato sauce, but do you do not accept that was a little bit over the line?” she said.

Griffin responded, “No, you’re full of crap. Stop this. You know this. Stop acting like my little picture is more important than talking about the actual atrocities that the President of the United States is committing, and I’m also on a mission to tell people honestly if it happened to me, as big-mouthed and obnoxious as I am, it can happen to you.”

What a lovely person.