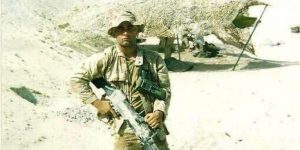 Recently there has but a major uproar over Gregory Salcido, a teacher at El Rancho High School in Pico Rivera, California, who attempted to bully two members of his US. Government class because they were wearing a Marine Corps sweater and sweatshirt.

“We’ve got a bunch of dumb [expletive] over there,” Salcido said in the recording. “Think about the people who you know who are over there – your freaking stupid Uncle Louie or whatever – they’re dumb [expletive]. They’re not like high-level thinkers, they’re not academic people, they’re not intellectual people; they’re the freaking lowest of our low.”

Combat veteran and Marine Rick Ferran has this to say as a response in his “open letter” to Mr Salcido:

Could it be that a 1% of the population is stupid by joining the military and serving a nation that places overpaid celebrities and Hollywood pedophiles on a pedestal? Are we really stupid by going through the most hardened physical and mental anguish to be part of the few and the proud to be part of something greater than one self? Even though all the cards are lined up against us? When we know that the VA is killing us every day.

How many Vietnam Veterans have died from Agent Orange? Where is the outrage? How many die from Gulf War Syndrome? How many from PTSD? Why are veterans more likely to die from cancer? The liberals love making movies about us with actors who have never served in the military or seen the light of combat, yet they disrespect our veterans and military any chance they get.

But not just the liberals, there are many companies who abuse the Veteran’s status by using wounded or combat veterans as props to sell their products and services, making millions of dollars and not paying those veterans what they deserve or anything at all. Are we too humble to stand up for ourselves or too stupid to think for ourselves?

“What is it about our breed that continues to stand up for the weak and the cowards against enemies foreign and domestic, when a large portion of our population would rather we wouldn’t exist? Should I have to remind everyone that Mr. Salcido is just one voice out of thousands of teachers across America who think the same way? Teachers who day by day preach their poison to our children? Should I be angry with Mr. Salcido?” he asked.

“No,” he said, “I am not angry, or at the students who laughed and agreed with his ignorant statement in the class. I am not angry at all, not anymore, not when our Veterans are being systematically killed at the VA.”

See, not everyone person in America has the opportunity to go to free college. If you are black or brown and if you are illegal, it’s a plus… no whites allowed. Even then our military is filled with minorities but why is that? I suppose only a madman or a stupid man would escape the democratic slave plantation to go join the military.

The only way out of the liberal slums created by the Democrats, the pits of hell in Chicago ghettos or South LA, is to fight or die defending something greater than one self. Yes, I suppose only a madman, or a stupid man would place their lives first before a stranger like Mr. Salcido or others like him. The military isn’t for everyone, it’s for a few misguided children of Uncle Sam’s who don’t want to fit in a box.

I may not speak for everyone, but for me as a Cuban Communism survivor, it was a way for me to give something back to the country that has given me so many opportunities. Call me stupid all you want, but not every day a Cuban Communism survivor can stand tall and call himself proudly a US Marine by earning the title so many have failed to do, even by those who are born in this great country.”

He also quoted former President Ronald Reagan: “Some people spend an entire lifetime wondering if they’ve made a difference. The Marines don’t have that problem.”