College Professor: Antifa has the right to beat people for their ideas (WATCH) 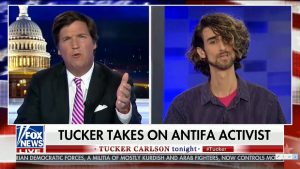 I think the most disturbing thing is that these 120 pound, snot bubble blowing, physical weaklings are SERIOUS!

Mike Isaacson, a professor at John Jay College of Criminal Justice who supports the radical far-left Antifa , told Tucker Carlson that the group has the right to PHYSICALLY BEAT political opponents.

From the looks of Mike Isaacson he couldn’t beat his way out of a soggy paper bag. Yet here we are – having to listen to morons like this guy, who is a college professor that has actually tweeted about executing his students. Yes! You read that correctly.

The Daily Caller says, “Antifa supporters like Isaacson share the belief that Donald Trump is a white supremacist whose actions will move the United States towards fascism. Violent actions against the police and domestic terrorism are therefore justifiable as acts of political resistance.”

According to him a person should be physically attacked with violence if they have ideas that are deemed fascist. And how does he define fascism? Take a look….

Therefore if you are anti-communism – like, let’s say you believe in capitalism – well then you’re a fascist. Therefore it’s okay for you to be attacked physically for holding to that ideal. You are dangerous! Isaacson and his Antifa minions reserve the right to beat you.

Good luck folks! It’s a whole new generation of revenge of the nerds. Take a look at the video below from Fox News as Tucker Carlson shreds him to pieces.