College Ordered To Fork Over $11 Million For Libeling Bakery As Students Protest Shop, Calling It ‘Racist’ 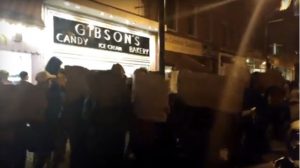 A jury recently handed out Oberlin College a not-so-favorable ruling, telling the Ohio school they must now fork over $11 million to a bakery after the shop was allegedly libeled amid student protests accusing Gibson’s Bakery of racial profiling.

Looks like another knee jerk reaction from the brainwashed young folk of another liberal university. What a waste of potential.

Gibson’s — a fixture in downtown Oberlin since 1885 — had been popular with students and was even featured on the college’s dining hall menu, Legal Insurrection said.

But that all changed the day after President Donald Trump’s 2016 election, the outlet said, when a black male Oberlin student was accused of shoplifting wine. Allyn Gibson — one of the shop’s owners, who is white — followed the student out of the store and a scuffle ensued, the Chronicle-Telegram said.

Two black female students got involved, Legal Insurrection reported. Police said when they arrived the three students were hitting Gibson while he was on the ground, the Chronicle-Telegram reported.

The students pleaded guilty in August 2017 to misdemeanor charges — shoplifting and aggravated trespassing, Legal Insurrection said — and read statements into the record saying Gibson was within his right to detain the shoplifter and that his actions weren’t racist, the Chronicle-Telegram reported.

Flyers were handed out claiming that Gibson was a racist who had a “long account of racial profiling and discrimination.” Oberlin Dean of Students Meredith Raimondo helped distribute the material on campus.

The Oberlin College Student Senate also passed a resolution claiming the business has a long history of racial profiling and discriminatory treatment of students and residents. The school ceased ordering products from the bakery after the protests, but then started up again in January of 2017.

The school stopped ordering once again after Gibson filed a libel lawsuit that accused Raimondo of tortious interference with business relationships and contracts, intentional infliction of emotional distress, and trespass.

The jury went on to find Oberlin did inflict emotional distress, interfered with business relationships, and libeled Gibson’s.

If the jury, which was probably mostly middle-of-the-road Americans, didn’t agree the evidence was substantial enough to agree with Oberlin’s claims, then that says a lot, doesn’t it?

Everything someone does these days tends to get them labeled as some sort of “ist.” Racist, sexist, ableist, ect.

We have grown to be people who seek to be perpetually offended, who can’t handle folks who think differently than they do about anything.