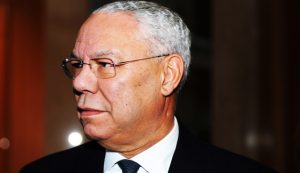 Colin Powell, the first black U.S. Secretary of State and top military official, whose reputation was stained back in 2003 after he presented less than accurate intelligence to the United Nations in order to justify going to war with Iraq despite his own misgivings, has died at the age of 84.

According to Powell’s family, he passed away due to complications from COVID-19, despite being fully vaccinated against the illness.

Democrats sent in many condolences, along with some of Powell’s fellow members of the Republican Party, including former President George W. Bush.

“Many presidents relied on General Powell’s counsel and experience,” Bush went on to write in a statement. “He was such a favorite of presidents that he earned the Presidential Medal of Freedom – twice.”

Former British Prime Minister Tony Blair went on to recall Powell’s self-deprecating sense of humor, along with his kindness to his staff and his “willingness to work across partisan division in the interests of his country.”

“Colin was a towering figure in American military and political leadership over many years, someone of immense capability and integrity, a hugely likable and warm personality,” Blair stated.

Powell was one of America’s foremost Black figures for decades. He was named to senior posts by three Republican presidents and reached the top of the U.S. military as it was regaining its vigor after the trauma of the Vietnam War.

Powell, who was wounded in Vietnam, served as U.S. national security adviser under President Ronald Reagan from 1987 to 1989. As a four-star Army general, he was chairman of the military’s Joint Chiefs of Staff under President George H.W. Bush during the 1991 Gulf War in which U.S.-led forces expelled Iraqi troops from neighboring Kuwait.

Powell, a moderate Republican and a pragmatist, considered a bid to become the first Black president in 1996 but his wife Alma’s worries about his safety helped him decide otherwise. In 2008, he broke with his party to endorse Democrat Barack Obama, who became the first Black person elected to the White House.

Powell will forever be associated with his controversial presentation on Feb. 5, 2003, to the U.N. Security Council, making President George W. Bush’s case that Iraqi President Saddam Hussein constituted an imminent danger to the world because of its stockpiles of chemical and biological weapons.

The former secretary of state later stated that he presentation he made before the U.N. was full of inaccuracies and twisted intelligence that was provided to him by other members of the Bush administration. He said this incident was a “blot” that will “always be a part of my record.”

Former President Bush chose Powell, who was the top military officer during his father’s time in the Oval Office, to be secretary of state back in 2001.