Co-Organizers Of The ‘People’s Convoy’ Say They’ll Be Peaceful, Start Off With Prayer 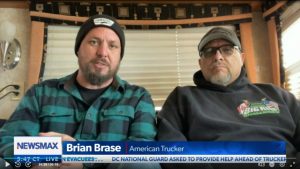 The co-organizers of the “People’s Convoy,” have stated that their particular chain of trucks that are driving from California to Washington, D.C., starting Wednesday, will be dedicated to being peaceful and will kick off with prayer.

The pair also stated they are not concerned at all about how the media tries to spin the protest because their actions will be obvious to anyone who watches.

“In an appearance Tuesday on Newsmax‘s “Spicer & Co.,” Brian Brase and Marcus Summers said media will be embedded with them and their route will be publicized. Although several other convoys also plan to make similar drives to Washington and some have different agendas, they have spoken to some of the ones who are of like mind and some of them even plan to join up en route,” Newsmax reported.

The report reveals that the convoy officially kicks off Wednesday in Adelanto, California and will arrive in D.C., on March 5 in the Beltway area. That will be four days after Biden makes his State of the Union speech, when government officials have been afraid the protests might occur.

“We’ve preached from the very beginning that this is a peaceful movement across the country,” Brase went on to say. “And while we are keeping some of our plans pretty close to the chest, it’ll be pretty clear that the People’s Convoy is peaceful.”

The convoy is inspired by the similar movement in Canada that shut down parts of the Canadian capital as well as bridges linking Canada and the United States. Prime Minister Justin Trudeau eventual invoked emergency powers to end the truckers’ action.

Summers said the convoy intends to “hold the line” until all the federal mandates are lifted, “from healthcare to pilots to military.

The group also wants to see accountability in the form of congressional hearings on the origins of the COVID-19 virus and the federal response to it.

“So we’re looking for, obviously, restoration of our liberty and freedoms,” Brase added. “You know our civil liberties, our freedoms as Americans as part of this and then ultimately it’s ending that emergency powers authorization that is in there, that state of emergency. If we get that state of emergency ended, then the mandates can go with it. And so that’s what we’re trying.”