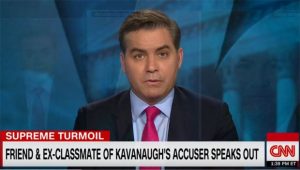 Who could ever have predicted that Americans actually wanted their news media to be—gasp—honest in reporting the news?

CNN apparently has found that out the hard way after all their collusion conspiracy peddling landed them on a hilariously epic downward trajectory in the Nielsen ratings.

Though they continue to desperately grasp at relevance by taking the occasional cheap jab at Fox News and forcing airline customers to watch their programming, CNN appears to have chased the Russian collusion roadrunner clear off the cliff, and boy is it fun to watch.

CNN had its lowest primetime weekly ratings overall and in the key age demographic last week, according to Nielsen Media Research.

In other words, even though they broadcast important events like townhalls that should have at least garnered a few viewers who can’t look away from the 2020 Dem trainwreck, CNN’s viewership is still tanking.

According to the latest round of Nielsen ratings, Fox News grabbed the top slot for viewers, followed by MSNBC, HGTV, USA Network, and TBS Network. Down the ladder a few more rungs—10 more, to be exact—CNN landed the 15th spot, trailing behind networks like The Discovery Channel, Food Network, TLC, and A&E, each of which managed to outperform CNN even though their biggest shows are done for the season.

That’s right, folks would rather subject themselves to Guy Fieri’s voice for the ten-thousandth rerun of Diners, Drive-Ins, and Dives than lend any of their precious time to CNN for more screeching, whining, and lying about the president. It’s gotten that bad.

If you take a magnifying glass to CNN’s numbers, it gets even worse—or, if you’re me, even funnier.

By the close of the first quarter of the fiscal year, each of CNN’s miserably unpopular “news” offerings didn’t even average enough viewers to reach the top 20, even if you only compare them to Fox and MSNBC.

Out of all the leftist propaganda CNN tries to pass off as news, only two of their shows (Cuomo and Cooper) managed to nab a million viewers. When it comes to dollars, termites, and YouTube views, a million is quite a hefty amount. If you’re counting television viewers, however, a million or less is a hilarious failure.

Fox News even outperforms CNN before most of its viewers have even smelled their coffee brewing. Their 4:00 AM show, Fox & Friends First, managed to grab more viewers than CNN’s New Day which airs a whole two hours later.

Maybe these numbers can shock CNN into getting back to their real job, reporting the news, but I’m not going to be tuning in to find out any time soon.