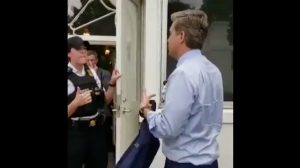 CNN White House correspondent Jim Acosta doesn’t really have what you might call a “good relationship” with the Trump administration. He’s been put in his place by Press Secretary Sarah Sanders and Trump himself on many occasions.

And, unfortunately, after another incident, this time involving the Secret Service, it doesn’t look likely that relationship will improve any.

Apparently Acosta was not recognized by Trump’s Secret Service detail on the White House grounds and proceeded to throw a fit about it. Apparently it was enough for one bystander to pull out their cellphone and begin to video the encounter. It would seem that Jimmy had calmed down a bit by that time. Damage done.

Known as “hard passes,” members of the media must display the credentials at all times (staffers have special pins so the Secret Service knows on sight who’s allowed to go where).

Acosta wasn’t wearing a pass around his neck, so a Service agent asked to see it.

“When you’re walking around,” the agent says, “we need you to wear it so we know who you are.”

Acosta gets huffy: “I’ve been here five years and nobody has said that to me.”

The agent jams him hard: “I haven’t been here five years, I didn’t recognize you.”

Apparently Acosta doesn’t understand that he’s not a White House employee who should be granted rights and privileges to be on the premises without flashing his identification.

These people are tasked with keeping the president safe. That’s literally their only job, and if we want them to do it right, they have to hold everyone accountable to the rules, even reporters like Jim Acosta.

He seems to think there is some sort of privilege that comes along with his job, and that might be true to a point, but thanks to people like him and the news organization he works for, there’s no doubt a lot of threats on the president’s life. Thus, the Secret Service has to work hard to make sure he is kept safe.

Time to grow up, Jim.