CNN’s Don Lemon Shreds Rittenhouse, Calls His Actions ‘Vigilantism,’ Says ‘If I See Someone Breaking The Law, I Call The Cops’ 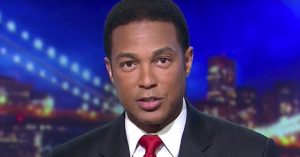 CNN’s Don Lemon, the same guy who attempted to twist up the riots that were ripping our country apart last year and justify the chaos and violence, took an opportunity on Friday morning to rip into Kyle Rittenhouse in his response to CNN’s Brianna Marie Keilar, referring to his actions as “white wannabe vigilantism,” and stating that “this is the ultimate entitlement,” before adding, “If I see someone breaking the law, I call the cops.”

This guy is a first rate hypocrite. Makes you wonder how people like this sleep at night, knowing they are wrong and helping radicals to ruin this country and destroy innocent people’s lives. Then again, maybe they’re all sociopaths and don’t really care about the misery they cause.

In January, Lemon justified the protests  that had plagued the country with violence and looting during the summer of 2020 as he compared them to the Capitol riot on January 6, saying, “I’m sick of people comparing. You can’t compare what happened this summer to what happened at the Capitol. It’s two different things. … One is built on people, on racial justice, on criminal justice, right, on reform, on police not beating up – or police treating people of color differently than they do whites. Okay? That is not a lie. Those are facts. Go look at them.”

Keilar prompted Lemon’s tirade by saying of the trials of Kyle Rittenouse and the alleged killers of Ahmaud Arbery, “There’s this theme of white wannabe vigilantiism that I think encapsulates both of these trials and I wonder what you think about, look, laws aside, how’s the defense doing aside, what do you think about just this idea that this is something people do that in some places this is still ok.”

“Well, it’s the same idea as I was saying about the judge,” Lemon replied. “This is okay because people are used to it. This is the ultimate entitlement. That again, you can insert yourself into a situation with a gun that you’re not supposed to be carrying, kill two people, injure, and it is you’re made to be a hero by the public. You see someone jogging down the street and you take it into your hands; you think it’s your responsibility to stop that person when you’re not even sure if they are committing a crime because, what, it is your street, it is your town, it is ‘your country.’”

“It is the ultimate degree of entitlement when people believe that this is how they’re supposed to be. What the right is saying about Kyle Rittenhouse is that, ‘Well, the government didn’t do its job. So it took a 17 year old kid to come in and do what was right.’ That’s vigilantism. That’s not what – people are not supposed to be vigilantes. We’re not supposed to be taking justice into our own hands,” the clueless CNN host added.

“Imagine if every single person in America did that,” Lemon said. “Imagine if you called for black men or, just black folks to be armed and go out into the streets and do what they think, justice, take it back. Remember, and what they did to you in slavery, whatever, go and take things. Imagine if people were condoning that. Or just doing that. Would there be a different perception in this country about who should and who shouldn’t carry guns? Would our gun laws be different? I certainly think so.”

“So there’s a double standard,” the CNN host claimed. “But it’s the ultimate degree of entitlement. This is what I’m supposed to do because this belongs to me. Meaning, this street, this town, and this country. And I think it’s tough for people to hear that but it is the absolute truth. I don’t walk down the streets saying, this is my — I pay taxes here and therefore I — no, if I see someone breaking the law, I call the cops. That’s what they’re there for. It’s supposed to be about law and order. This isn’t about law and order. This is about unlawful conduct and disorder.”

Guys, this man is delusional. What’s sad is that there are so many Americans who watch him and think that he’s right on the money about Rittenhouse and other important issues of the day.

The video footage makes it clear that if Rittenhouse hadn’t been armed, he likely would have been severely injured or maybe even killed. We have a Second Amendment right to defend ourselves by owning firearms.

Kyle Rittenhouse exercised his right and because of that, he’s still alive.