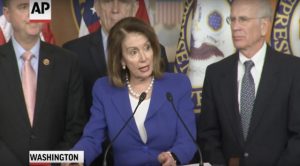 You know you’ve really screwed up as a Democrat when even CNN’s Don Lemon takes you to task for your hypocrisy and pokes fun at your lame attempt to blame shift.

Speaker of the House Nancy Pelosi has been in the hot seat ever since security footage was released showing her visiting a hair salon during the coronavirus lockdown, violating the restrictions.

Pelosi has attempted to shift the blame to salon owner Erica Kious, claiming the whole thing was a set up.

Lemon wasn’t having any of that.

“So the speaker of the House is blaming the salon after she didn’t wear a mask indoors. Tonight, the salon owner is denying it was a setup,” Lemon said. “Regardless, this far into the pandemic, the House speaker should know what is safe and what isn’t. We should all know. It’s our responsibility. Instead of claiming a setup, would have been just as easy for the speaker to say, ‘You know what? I messed up. I should have worn a mask indoors.’”

And Lemon scolded Pelosi like a child: “Shouldn’t she know better?”

In security footage obtained by Fox News, timestamped Monday at 3:08 p.m. PT, Pelosi can be seen walking through the ESalonSF in San Francisco without a mask. Ironically, during an appearance on MSNBC that same night, Pelosi blasted President Trump for delivering his Republican National Convention acceptance speech before a live audience on the White House South Lawn at the White House, where many people were not wearing masks.

Apparently, Pelosi thinks she’s above the rest of us and doesn’t have to obey the same rules, regulations, and mandates the general public has been forced to endure ever since the coronavirus madness took over the country.

Guys, this is the way the vast majority of liberal politicians think. They truly do believe they are better than you. Politicians are supposed to work for you. You aren’t their servants. They are yours.

Liberals want desperately to change that. We can’t let them.