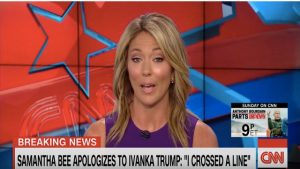 This week has been absolutely loaded for bear with liberal bias and hypocrisy, as we witnessed the implosion of Roseanne Barr early in the week for making a controversial comment insulting Valerie Jarrett, which resulted in her show being cancelled, and saw a liberal comedian pull a similar stunt and basically have zero negative consequences for it.

TBS comedian Samantha Bee, on an episode of her show earlier this week, referred to Ivanka Trump, the president’s daughter, as the “c-word,” which is pretty much the most vulgar term you can call a woman.

Unlike Roseanne, who was booted just a mere few hours after her comment about Jarrett, Bee has yet to face any serious consequences for her actions.

CNN’s Brooke Baldwin weighed in on the whole debacle and destroyed the media over their double standard.

“The same rules apply no matter which political side you call home,” Baldwin said on CNN. “Conservatives have been pointing to a double standard on how liberal stars who say these offensive things are treated, versus their conservative counterparts, and in many cases, rightfully so.”

Baldwin noted that the same people who were rightly outraged over comments made by Roseanne this week are the same people celebrating Samantha Bee. She also noted that ESPN, the network owned by Disney who fired Roseanne, just signed Keith Olbermann to host another show despite his rap sheet of hateful rhetoric toward the president and his family.

“Despite all of this, he just got another plum job. A job, ironically, at the same company that just booted Roseanne for violating its values,” Baldwin noted.

“Whether you agree with the president’s policies or not, calling a senior adviser inside the United States government — or anyone for that matter — the ‘C’ word is, like I said at the top, it’s outrageous, it is unacceptable and should be called out,” Baldwin said.

“She could have easily made her point without using those words, a point that, by the way, is totally lost because she used that language. Doing this, she is no better than the very behavior she criticizes. In fact, she becomes part of the problem.”

Here’s a video clip of the takedown:

Inconsistency in the application of principles is one of the major discrepancies between progressives and conservatives. The left purports to be all about tolerance, racial and sexual equality, yet that only seems to apply if you believe in their ideology.

If you happen to be a woman who is Republican, they could care less when your integrity and honor are vulgarly insulted. However, if you do that to one of their heroes, you’re the scum of the earth.

This is precisely why the vast majority of Americans do not take liberals all that seriously. If they want to be treated like adults, they need to act like adults, and that means equally applying their standards to all people.