CNN’s April Ryan and the Former Mayor of Baltimore Joke About Street Fighting Sarah Sanders on Twitter…Is This Real Life? 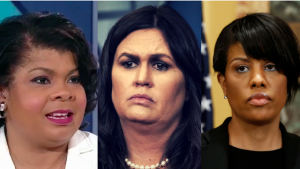 In the following article, we will be discussing events that transpired involving two adult women discussing a third adult woman on a public social media platform. All three adult women are in incredibly powerful and hold or have held prominent positions in the American political scene.

And yet, two of these women, despite being highly successful and (somewhat) respected in their respective careers, apparently think it is becoming of women such as themselves to discuss said third woman in the manner found more commonly among middle school students.

This is incredibly shocking, of course, to see the level of discourse and simple decency plummet in our once great nation.

There is one simple explanation of behavior that is so shocking, it can only be explained by psychological duress:

Trump has made the entire left lose their ever-loving minds.

April Ryan and Sarah Huckabee Sanders regularly clash on the floor of the White House Press Briefing room, but Ryan recently took something minor Sanders said and turned total drama queen on everyone.

Here is the exchange, as told by the Daily Wire’s Hank Barrien:

Ryan snapped, “Why didn’t you talk to the White House Press Office about his impacting, stellar statements about what was happening?”

Sanders answered coolly, “I didn’t use that term.”

Ryan then admitted she was lying, but pressed on: “Well, I said it, but you were blindsided by what you said.”

Sanders finished her off: “Well, with all due respect, you actually don’t know much about me in terms of what I feel and what I don’t. I think we’re done here.

Asked by Don Lemon of CNN later on Thursday, “What was that all about?”, Ryan pontificated, “I think she’s feeling some kind of way.” She whined, “She’s catching feelings from this weekend and I guess I was her whipping post but I’m not a whipping post. She’s 35; I’m 50; I’ve been at the White House for 21 years to her what? One? If that.”

Now, Ryan has recruited former mayor of Baltimore Stephanie Rawlings-Blake into her corner…and it seems like they’re thinking that might be literal.

Amber Athey busted the ladies out for their ridiculous exchange:

Hey @CNN, care to comment on one of your political analysts joking about getting into a physical altercation with the WH press sec???? pic.twitter.com/Wwx9UvLV6l

And they say Trump lowers the decorum of the White House? The left is so completely upset that Trump won in 2016 that they will do whatever it takes to manufacture a source of outrage from his administration.

Mrs. Sanders’ comments were perfectly legitimate, and nothing out of the ordinary for her to say to a reporter, and yet Ryan was so determined to turn it into some kind of drama, she ends up looking like a complete fool as she jokes about fist-fighting the Press Sec. with her Dem. mayor buddy.

Leftists are so frazzled over the Trump admin, they’re shooting themselves in the foot! And that truly might be one of the most hilarious and satisfying things about his presidency yet.