CNN’s Ana Navarro Blasts Trump For Visiting Texas and Gets Blasted Back! Don’t mess with Texas 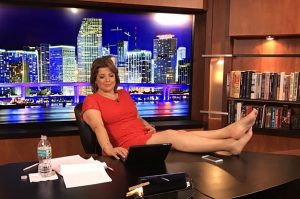 IJR.com reports President Trump departed Washington, D.C., Tuesday morning to visit with the victims of Hurricane Harvey in Texas. The president will meet with First Responders and FEMA on his tour and assess what more the White House can do to assist those who are suffering greatly under the deadly storms and flooding that the hurricane brought. Tens of thousands in South Texas have been displaced by torrential, unprecedented flooding. Texas’ suffering has united many in beautiful stories of bravery and courage.

Some commenters, however, seek to make the tragedy political.

Republican CNN analyst Ana Navarro could not help but send a snarky tweet this morning as the president departed for the disaster area, saying the people of Texas were already “enduring enough suffering.”

As if the people of Texas! aren't already enduring enough suffering…. https://t.co/gIH123g3iu

This is not the first time that Navarro has taken a historic moment in nature and used it for political commentating. Navarro could not bring herself to watch last week’s eclipse because she was so troubled about Trump being president.

Navarro’s turning of a deadly natural disaster into a political attack was not appreciated by those who follow her on Twitter. Nor was it appreciated by suffering Texans. Here comes the smackdown!

Darlin', you don't speak for #Texas. Even the #Liberals I know can see through your bullshit. Grow up. #Harvey https://t.co/9ZwDF4YYFi

Not sure WTH she knows about the people of Texas. She will get plenty of "likes" & that's all that matters. BTW she worked for Jeb Bush camp https://t.co/2s8LfIwaTU

I live in near Baytown. Not sure what he can do but his presence is a welcome sight Ana doesn't speak for Texans that are going through this

Life lesson here: Not everything is political. Especially when people’s lives are on the line.

Hurricane Harvey has claimed at least 14 lives so far.