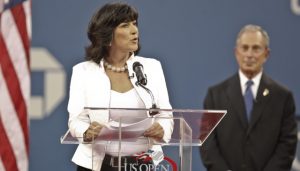 CNN anchor Christiane Amanpour came out and admitted that she has some pretty big regrets about equating President Donald Trump’s time in the White House to Kristallnacht, the horrific assault on the Jews by Nazi Germany that many believe kicked off the Holocaust.

Amanpour was criticized by a very prominent Jewish organization after she made the controversial comments last Thursday evening on her nightly interview show that airs on both CNN International and PBS.

Amanpour had noted the 82nd anniversary of Kristallnacht, an attack on Jews, their businesses and synagogues that happened Nov. 9-10, 1938. She said it was an assault on “fact, knowledge, history and truth,” and that the Trump administration represented a modern-day attack on the same values.

The American Jewish Committee’s CEO, David Harris, said it was odd that Amanpour didn’t mention that the Nazi’s targets that night were Jews. While she’s entitled to her opinion about Trump, bringing up Kristallnacht represented a “misuse of history,” he said.

Amanpour, on her show Monday, said she regretted any pain that her remarks caused.

“I should not have juxtaposed the two thoughts,” the CNN host said. “Hitler and his evils stand alone, of course, in history.”

It’s become common practice for the radical left in our country to refer to any and all conservatives as Nazis, proving they clearly have no idea that many of Hitler’s policies actually reflect their party’s platform.

Guess that’s what happens when you are taught revisionist history and are brainwashed by propaganda from the moment you’re brought into the world.