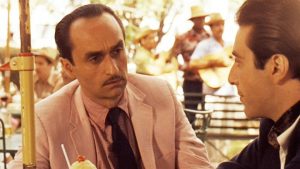 While we wait for more details and theories to bubble up from the Jeff Epstein case, let’s enjoy this scene in which CNN’s Chris Cuomo (and brother to this unfortunate writer’s governor) absolutely flips his dang pancake over an insult based on The Godfather films that he claims is “the N-word” for Italians.

According to The Daily Wire, the video, first reported by Brandon from “THAT’S THE POINT,” shows Cuomo snapping after being heckled at an event in New York over the weekend.

Warning, Cuomo owes the swear jar quite a bit after this stunt:

“I thought that’s who you were,” the man says to Cuomo.

“Fredo is from ‘The Godfather,’ he was that weak brother and they’re using it as an Italian aspersion,” Cuomo continued. “It’s like the ‘n-word’ for us.”

The man responded to Cuomo’s intense words by saying, “You’re a much more reasonable guy in person than you seem to be on television.”

Cuomo later said, “You’re going to have a f***ing problem.”

The man responded, “What are you going to do about it?”

Now, to be totally fair, hecklers are jerks, and this dude seemed like a jerk. You’ve got a problem with somebody? Act like you have a brain and use points and arguments, not insults.

That said, Cuomo obviously needs to lay off the coffee and maybe take up yoga. That could’ve gotten ugly, fast.

What did end up getting ugly was CNN vice president and spokesman Matt Dornic’s defense of Cuomo after the incident went viral.

The video of the incident, which ended up being shared by Donald Trump, Jr., was widely criticized for Cuomo’s categorization of “Fredo” as a serious ethnic slur—a statement CNN was ready and willing to accept as fact.

I assume @cnn not available for comment. Imagine their coverage of this if they were a real news organization? https://t.co/uH2biAkKUZ

It turns out CNN was available for comment, but not a particularly intelligent one:

Chris Cuomo defended himself when he was verbally attacked with the use of an ethnic slur in an orchestrated setup. We completely support him.

Dornic wasn’t done, however. Given the golden opportunity to throw some shade (like the kids say) at a Trump kid, Dornic went for it with gusto:

Well, alrighty then. I can see where the news organization gets its professionalism and dedication to facts from.

Does CNN’s head of PR still think “Fredo” is an ethnic slur after watching this? Because if it’s the N word for Italians like @ChrisCuomo says, I don’t understand why Chris seems so at ease with someone saying it here. An excuse just as fake as his news. #FredoCuomo https://t.co/8G8yuY80CK pic.twitter.com/1gwVyDVCob

Nailed it. Nailed it good.

As far as Cuomo’s complaints, the People of Twitter™ are ready to set him straight on that whole “Fredo” thing. Enjoy:

That one is a bit of a read, but it perfectly illustrates why Cuomo is full of alligator turds.

As Oprah always reminds us, the n-word is the last thing black men heard before they were strung up from a tree or when black women were raped. Nothing is comparable to the n-word.

Sorry to get heavy (and to lend an ounce of authority to Oprah on any matter of significance), but that’s a valid point.

And, lastly, Hot Air’s AllahPundit with a point that almost sent coffee up my nose:

Chris would have been Sonny if he had beaten this dude with a trash can lid https://t.co/0pqITsI5Am

And, with that, I conclude this distraction from the fact that Jeff Epstein’s cellmate was suspiciously transferred hours before his death. Onward and upward to real news!