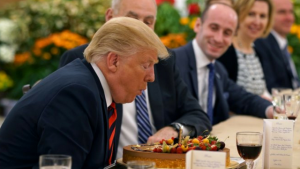 You think at this point, CNN would try to work harder to cover up their blatant contempt for the President and absolute refusal to simply report on the facts.

They don’t even need to praise Trump. All they’d have to do is cover the news. You know, like a news channel is supposed to?

But no, they are so lacking in self-awareness, they’d sooner extract far-fetched political significance from the menu at the historic Singapore summit held Tuesday than even attempt to feign journalistic integrity.

The Daily Wire reports that “as President Donald Trump and North Korean Leader Kim Jong-un held a historic summit halfway across the world, CNN was busy complaining about the food served on the menu at the event in Singapore.”

“Don Lemon, former Obama official and current CNN analyst Samantha Vinograd, and analyst Jonathan Wachtel complained about everything from the lunch itself to how expensive the items were on the menu.”

“I want to bring it back to the menu for a second,” said Vinograd when there was apparently nothing better to talk about. “Typically the White House releases these kinds of details after, for example, the French president comes to the White House or another head of state comes for a state visit. So, by releasing the details of the menu, this is again legitimizing Kim Jong-un and putting him on equal footing with other world leaders.”

Despite this bizarrely overthought observation barely making a lick of sense, Wachtel ran with it, saying she could only think of “all the poor North Korean people,” while Lemon read the items on the menu.

These folks sure didn’t seem to care about all the poor North Korean people when Trump was threatening to dismantle Kim’s tyrannical reign last year….

CNN complains about the food on the menu at the #TrumpKimSummit pic.twitter.com/CuiiWtCStc

Here’s a thought: are we to believe these folks were snacking on party platters from Costco on the set and go home to Ramen noodles and hot dogs?