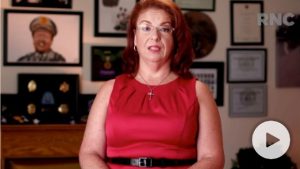 CNN is one of the worst news organizations on planet earth. All they’ve done for the last several decades is serve as a propaganda machine for the radical left. Time and time again we’ve seen them craft false narratives, lie right to their audience, and also attempt to spin riots as if they were peaceful protests.

But they’ve now sunken to a brand new low, something once thought impossible. CNN actually attempted to pit slain former police officer David Dorn’s family against each other after his widow delivered a powerful speech at the Republican National Convention.

.@ChrisCuomo is so despicable that he has no problem with pitting different sides of a grieving family against each other. This is another instance of @CNN attacking Ann Dorn, the widow of Capt. David Dorn who was murdered by a leftist mob. pic.twitter.com/Y6ayogbEL0

Despicable: In CNN's 2nd disruption of night four of the #RNC2020, Jake Tapper and Abby Phillip attack Capt. David Dorn's widow. Phillip says having the families of victims of violence is a problem because the deceased can't say how they feel about it. pic.twitter.com/DBAtpJzLfC

During CNN’s RNC coverage, Jake Tapper and Abby Phillip also criticized Dorn’s widow before she even spoke, claiming that the true victim is not around to decide if he should be mentioned during a political speech.

CNN is absolutely evil. Truly. Nothing is below the belt for these fake news propagandists. Not even tearing a family apart to further their own anti-Trump agenda.

How low can you go? A grieving family being taken advantage of by a supposed news organization is basement dwelling journalism. This is truly sad.