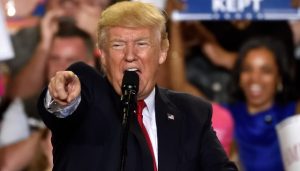 Everyone’s favorite purveyor of fake news, CNN, has sent off a cease-and-desist order to the presidential reelection campaign of Donald Trump over an ad that features footage from CNN coverage that agrees with how the administration has handled the COVID-19 outbreak.

According to the network, this footage is “deceptive” because it dares to suggest the notion that one of their analysts agreed that Trump’s actions saved millions of lives.

However, the president’s campaign is not taking this lying down. In fact, they’ve started to strike back against the letter and the network for their claims.

Check out the ad in question:

“A lawyer for CNN’s parent company WarnerMedia has written a cease-and-desist letter to President Trump’s re-election campaign over the misleading contents of a new campaign ad,” the network announced Monday. “WarnerMedia says the Trump ad is misusing CNN news coverage in a way that’s ‘false, misleading and deceptive.’”

CNN host Brian Stelter says the network is continuing to maintain that the framing and editing of the video featuring the exchange is “misleading,” by giving off the impression that Wolf Blitzer and Gupta are referencing the president’s travel ban instead of the social distancing measures that have been recommended by the administration:

The ad takes a segment from CNN’s “The Situation Room” out of context. On March 30, anchor Wolf Blitzer asked Dr. Sanjay Gupta, “Well, is it accurate that if these steps had not been put in place, the stay at home orders, the social distancing orders, as the President said yesterday, it could have been 2 million people down here in the United States?”

Gupta responded, “I mean, you know, these are all models, Wolf. It’s a little tough to say, but, you know, if you talk about something that is spreading, you know, very robustly throughout a community. You know, two to three times more contagious than flu, and up to 10 times, perhaps even more than that, more deadly than flu, then yes.”

Blitzer’s question was about “stay at home orders” and social distancing, but in the campaign ad, that portion of his question was omitted. After Blitzer and Gupta are shown on screen, the ad cuts to taped video that invokes Trump’s restrictions on travel from China, like an airport screen showing cancelled flights.

The letter was received by Trump campaign communications director Tim Murtaugh, who said that CNN is “once again” finding a reason to try and block the ad. According to him, the network “has now rejected multiple Trump ads that are demonstrably accurate.”

Is it any surprise that CNN would bend over backwards to try and stop a Trump ad from airing on their network? These two factions have essentially been locked in a battle of words ever since the president took office in 2017. The media is finally receiving pushback for their support of a radical left-wing agenda and are beside themselves over it. Fighting like this is all they can do to escape from having to allow Trump’s voice to be heard on their own network.

Sad that this is what journalism has become today, isn’t it?