CNN Let Crowd Call Dana Loesch “Murderer,” Got Award for It. She Just Fired Back. 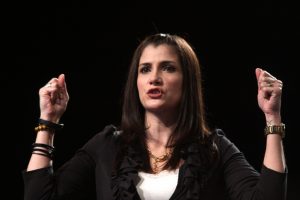 One of the very lowest points in mainstream American media over the last few years (and the competition is stiff) was the deliberately divisive “town hall” style event CNN held days after the deadly Parkland shooting to “discuss” gun control.

By “discuss,” of course, we mean to let a crowd full of angry, liberal teenagers call for her to be hanged and give Sheriff Scott Israel ample time to blame her personally for the heinous attack that his department completely failed to prevent from happening in several different ways.

Dana Loesh, the subject of proverbial rotten tomatoes hurled at her as well as Florida Sen. Marco Rubio, has spoken out frequently about the treatment she was subject to in that event and how she and Rubio were set up to appear to be the villains, complete with playing loud music when she entered the stage as though she were a pro wrestler making his entrance into a fight.

Now, in a move that tells you everything you need to know about the state of American journalism, CNN has received an award for last year’s television event.

On Tuesday, CNN trumpeted that the network had won the Walter Cronkite Award, administered by USC’s Norman Lear Center and announced by the USC Annenberg School for Communication and Journalism, for the Parkland Townhall in which NRA spokeswoman Dana Loesch was booed and even called a “murderer.”

Annenberg professor Marty Kaplan, director of USC’s Norman Lear Center, took a shot at President Trump, chortling, “If the press is the ‘enemy of the people,’ then being on this ‘enemies’ list is a badge of honor for these exceptional journalists.”

Hilariously, the Norman Lear Center titled its press release announcing the award, “Cronkite Award Proves That Facts Matter.” It stated, “CNN Parkland Town Hall, a two-hour special, aired only seven days after 17 students and teachers were murdered by a gunman at Marjory Stoneman Douglas High School. In this ‘compelling and powerful’ forum, moderator Jake Tapper deftly gave generous space to speak to gun control advocates, politicians, Parkland students, parents and a representative from the NRA. The program helped ‘advance the national conversation on gun control and violence,’ the jury said.”

Well, Loesh was having none of this. She completely destroyed any question of the network’s journalistic integrity in this epic tweet storm:

Is this a joke? Seriously. https://t.co/Hj7yVCZlhf

Here is some footage where people were yelling to burn me at CNN’s award-winning townhall where they “advanced the conversation on gun control.” pic.twitter.com/EYWWj8KcxN

More from @CNNPR @CronkiteAward winning townhall wherein they did so much to advance the conversation on gun control pic.twitter.com/d1svHRHAuJ

More from @CNNPR @CronkiteAward winning townhall wherein they did so much to advance the conversation on gun control, look at the great conversation taking place. pic.twitter.com/n1wFnPaFZh

This is what happened when the cameras turned off at @CNNPR ’s award-winning townhall. They’re proud of it. pic.twitter.com/pe8MWTfCqi

CNN is proud of this, their Cronkite Award™-winning townhall where they advanced the conversation on gun control. There is more video still. pic.twitter.com/Pk6xAZZ3co

Some interesting notes: CNN set this up like a WWE event. Purposefully. They allowed Scott Israel to take the stage before the cameras turned on and electioneer; he took that time (about 20 minutes) to start blaming law-abiding gun owners.

When the producers cued me to walk into the arena it was to the Black Eyed Peas’ song “Let’s Get It Started.” I am completely serious. I was shocked and confused — while I knew I was taking questions, we were only told that day that I would actually be on stage.

I showed up in good faith for genuine conversation knowing that at best, it would be a tough event. The lengths @CNNPR went to inflame emotions & exploit pain to *put on a show* is inexcusable, shameful, & it’s grotesque they’re celebrating getting an “award” for their conduct.

I’m on air across the country right now, so feel free to take this up with me on my airwaves at any time now or convenient for you in the future. Shame on you. You advanced nothing, you set genuine dialog back by ages, @CNNPR @CronkiteAward .

Those with integrity would reject this absolute sham of an award. But, narratives and ratings. Congrats on the “show,” CNN. Applause, applause.