CNN Host: “No One Is Blaming Trump” for Pipe Bombs as His Own Network, Leftists Everywhere Blame Trump 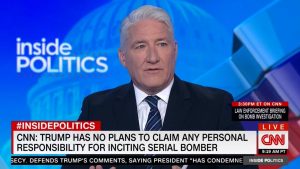 It seems that the only story this week that has been bigger than the pipe bombs sent to several major Democrats (and one foul-mouthed actor) is the fact that the left is tripping all over themselves to blame Trump.

Nevermind that Trump immediately condemned, in no uncertain terms, the use of violence, vowing to throw the entire weight of government behind the investigation into who sent the homemade explosives.

Nearly every single major media network has found a way to indirectly blame the President for “violent rhetoric”, almost as if we aren’t living in a nation in which leftists have been violently foaming at the mouth since Trump took office.

Here are just a few examples of violent rhetoric, and flat-out violence, coming from the left just in the last few months:

Meanwhile, here are the violent things Trump has said and done over the last month:

Of course, some on the left may have picked up on the rather unfair characterization of the President as responsible for several homemade pipe bombs and are trying to walk it back, a difficult task when the rest of their ideological cohorts in the mainstream media double-down on the narrative.

From the Daily Wire:

CNN host John King claimed on Thursday that “no one” was blaming President Donald Trump for the pipe bombs that were sent to several Democratic figures this week as his panel then proceeded to blame the president for the pipe bombs.

As King was making his remarks, CNN’s chyron stated: “CNN: Trump has no plans to claim any personal responsibility for inciting serial bomber.”

“Of course he played no role in this,” Politico reporter Rachael Bade said, before speculating: “But you have to look at the greater context to this atmosphere he has created in Washington in attacking the media, and you have to wonder if that contributed to what happened yesterday.”

In other words “Of course this isn’t Trump’s fault, but we might as well spend the next two weeks explaining how it’s still totally his fault.”