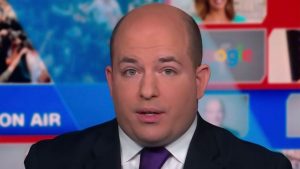 CNN political pundit Brian Stelter is getting pummeled all across the Internet after making the ridiculous claim that the recent push to ensure that Biden doesn’t participate in any presidential debates against Trump originated with “mostly right-wing media.”

This statement was made on Monday evening, after a number of publications ran pieces — including the NY Times — saying Biden shouldn’t even bother to show up at the debates.

Stelter, once dubbed the media’s “hall monitor,” appeared to reject the premise of Benson’s comment.

“It is mostly a right-wing media tempest, fueled by hour after hour of Fox commentary (not reporting), far removed from campaign reality …,” the CNN pundit told Benson.

It is mostly a right-wing media tempest, fueled by hour after hour of Fox commentary (not reporting), far removed from campaign reality… https://t.co/nQd4b312vX

Benson shot back with a screenshot made by Reagan Battalion of various headlines from The New York Times, Newsweek, even CNN, where Stelter’s own colleague Joe Lockhart urged Biden to not debate Trump,” Benson shot back.

Via @ReaganBattalion, it seems as though this notion wasn’t invented out of whole cloth by conservatives. It’s an idea that has been floated by left-leaning figures/outlets… pic.twitter.com/Ce4s8cnPhh

Stelter then appears to resort to typical left-wing tactics ripped straight from their playbook by shifting his argument around.

The CNN pundit wrote, “I’m well aware. but it’s a mistake to spend lots of precious time yakking about what leftie columnists are suggesting in this case. obviously biden will debate. why imply otherwise to viewers, hour after hour?”

The two managed to keep the conversation civil and respectful, many other folks out in the land of Twitter were none too happy with Stelter’s comments.

When I think about my most Reliable Sources as a reporter, I definitely think about the sources who are shameless partisans who are utterly unwilling to admit when they're wrong and are brazen & embarrassing as they double down when proven to be laughably & demonstrably off base. https://t.co/DOOkVVJzVw

There’s plenty more where that came from.

Why can’t the left just be honest for once? We all know that the reason they are pushing so hard for Biden to avoid taking on Trump in a debate is because it would make it nearly impossible for the propaganda arm of the Democratic Party — also known as the mainstream media — to cover-up the former vice president’s mental issues.

These people are scared. Deep down, they know Biden is incompetent and not mentally sound enough to be president. Letting him make public appearances is disastrous for their campaign efforts, therefore, they want to keep him away from speaking as much as possible.

Here’s to hoping we get the entertaining show of watching Biden flounder before the president.