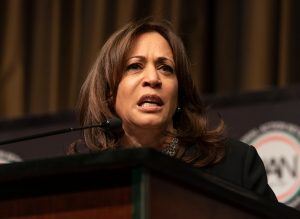 Y’all, the times I appreciate the work of a CNN employee are few and far between.

This is one of them.

In an interview with 2020 Dem hopeful Sen. Kamala Harris, John Berman, co-host of the network’s morning show, New Day, took Harris to task over remarks that her version of socialized healthcare was being unfairly described by her opponents.

“Under my plan of Medicare-for-All,” Harris continued, “private insurance companies will be able to provide coverage if they play by our rules. Therefore, what that means is that you don’t have to be wed to your employer to keep the insurance that you like and that you need.”

Amazing. All those words to give an indirect answer when all the man asked for was just one: “yes,” or “no.”

Berman didn’t let up, cornering Harris with the fact that she’d be taking away Americans’ employer-provided health insurance.

“They get to make the choice,” Harris said, getting markedly quieter.

“No,” Berman retorted, “you’re basically allowing for a Medicare Advantage plan, where, insurers can enter that plan and they can choose it if they want to. But if you’re getting insurance from GM, from your employer, you will not get to keep that … It’s a private plan, not necessarily your private plan; there’s no guarantee that your private plan will be part of that [option].”

Holy buckets, that was like pulling teeth with chopsticks.

In a handy dandy little fact-check piece, The Sacramento Bee confirmed Berman’s point that Harris does indeed plan to rob Americans of their employer-based healthcare plans:

“Harris argued that her healthcare proposal, unveiled earlier this week, wouldn’t make anything ‘illegal.’ That is true, but it would ultimately eliminate the way most Americans currently get their health insurance: through their employer.”

The Bee also noted that “more than three-quarters of the public have a favorable view of employer-sponsored health coverage,” according to July polls from the Kaiser Family Foundation.
I’d hope we can all be grown-ups enough to applaud Berman for grilling Harris over her garbage policy. Done applauding? Great, now back to ignoring CNN and their fake news.