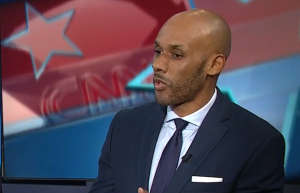 I never get sick of leftist hypocrisy.

Maybe you do, and that’s fair, but holy buckets is it entertaining to watch these people contradict themselves in a matter of moments and utterly destroy any credibility they may have had before opening their mouths.

As we previously reported, last week saw the internet explode after President Trump likened the ongoing impeachment process to a “lynching” in a tweet, only to find that many of the top Democrats who ripped him over it were on record using the phrase in the same way over the Clinton impeachment. It was glorious.

Assorted pundits, such as CNN commentator and former White House aide Keith Boykin, went quite a bit further in being a “bad cop” for the thought police.

“Trump tweeted today that the impeachment process against him is a ‘lynching.’ No, sir, this is what a lynching looks like,” Boykin said in a tweet alongside an extremely graphic photo of a black man hanged on a tree. “Thousands of black people were lynched in America from the 1870s to the 1960s. And it happened because of racist, cowardly white men like Donald Trump.”

While Americans would be remiss to forget the blight on our national history that is the era of lynch mob murders, Boykin’s tweet exploited shock and disgust simply to dunk on a political foe and link him to the violent, legitimate racists who murdered black Americans throughout that vile stain on America’s history.

What Boykin and his ilk clearly forget, however, is that words have meanings. Shocking, I know. But, let’s be a hell of a lot slower to compare someone like Trump who, to my knowledge, has never literally lynched someone or expressed legitimate hate or feelings of superiority over other people merely due to their race with, you know, people who have.

But just a couple of days later, Boykin demonstrated just how massive the Dem double standards really are.

According to NewsBusters, Boykin was one of the panelists on CNN’s “The Lead with Jake Tapper” discussing the move by a group of House Republicans to crash a closed-door impeachment hearing in an attempt to draw attention to its secretive nature.

CNN host S.E. Cupp offered a mild enough, if inaccurate, take on the incident, comparing it to a scene from “Old School.”

“Matt Gaetz is basically the Will Ferrell of the party — ‘We’re going streaking! Who’s with me?” Cupp said. “These are fraternity stunts. … They look like fraternity brothers crashing a party that, by the way, many of them were invited to.”

Boykin would go a hell of a lot further, it turns out.

Just a couple of days after chiding the president for inappropriately evoking the term “lynching,” the man goes ahead and likens the GOP gathering to a KKK mob getting ready to lynch someone.

Because a bunch of white Republicans gathered automatically equals a lynch mob, apparently.

Even CNN’s Jake Tapper thought the Klan/lynching metaphor went one toke over the line.

“Respectfully, I think the Klan metaphor was a little strong. I don’t want to get into a whole thing, but earlier this week we were talking about lynching and using that word lightly,” Tapper said.

“I used it purposefully, because I felt like it is a visual problem, too, to have this group of almost all white men going in — in defense of the white man who is already, I think, by most accounts, a racist, instead of dealing with the issue of how this person is abusing his power as president of the United States,” Boykin responded.

“I just wanted to register and then we can move on,” Tapper said, scurrying away from the topic as fast as he could.

Of course, we know better than to expect any sort of public apology from Boykin over his grossly inappropriate comparison of the House Republicans looking to alert the American people to the shady dealings of impeachment proceedings with a bunch of Klansmen looking to murder a black person.

That would require dignity and consistency, something we know better than to expect from ultra-leftists by now.