CNN Claims There Have Been 22 School Shootings in 2018, There’s Just One Problem… 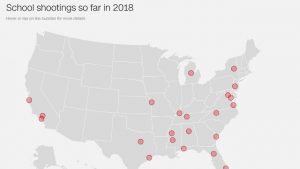 CNN has been reporting on the awful shooting that took place at Santa Fe High School in Texas early on Friday, and as you might expect, they are doing their best to push an anti-gun narrative, not allowing the events of the day to completely unfold before launching into a political discussion on the topic.

Listen, no one is saying that school safety isn’t an issue to discuss, but shouldn’t we at least wait a little bit until things have quieted down and people process what has happened? It’s a little much. Eight people have lost their lives here.

What’s worse is that CNN is claiming that there’s been multiple shootings per week in schools since the beginning of the year.

As per usual with CNN, that’s not entirely accurate.

Including today’s shooting incident at a Texas high school, this year there have already been 22 school shootings where someone was hurt or killed. That averages out to more than 1 shooting a week. https://t.co/DL1wCUAipq pic.twitter.com/Qsw0WlLlJv

Every shooting is an act of evil. But this statistic is plainly untrue. CNN used the following parameters for their count:

A shooting that occurred on school grounds

Conservative Ben Shapiro breaks down the various incidents these folks are counting toward their total number of shootings:

March 13, Seaside, CA: A teacher accidentally discharged a firearm during a public safety class. No one was killed.

March 8, Mobile, AL: A non-student was shot at an apartment on the University of South Alabama campus.

March 7, Jackson, MS: A student was shot at a dorm at Jackson State University.

February 9, Nashville, TN: A 14-year-old shot a 17-year-old in a targeted murder attempt in a parking lot of a school.

January 31, Philadelphia, PA: A 32-year-old non-student was shot outside a high school after a fight.

January 20, Winston Salem, NC: A college football player was shot to death on campus at a party.

Now, this isn’t to say that these incidents aren’t worth talking about on the news, but it’s not right to call these “school shootings” as if they are on par with what happened today in Texas or in Parkland, Florida.

There have actually only been like seven of these incidents, not 22. However, seven is seven too many. Real action needs to be taken to end this horrific violence.

It doesn’t start with gun control, it starts with armed security teams in every public school, and it ends with us abandoning the insanity of progressivism and focusing on providing children with what they really need: strong family units with a mom and a dad.