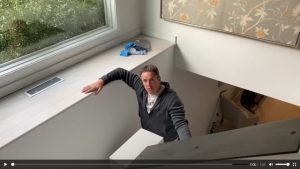 CNN host Chris Cuomo has officially been given the all-clear by the CDC to come back and join the rest of the world after going to war with coronavirus and quarantining himself in his basement for the last several weeks.

Cuomo’s wife was also diagnosed with the illness and has also received the green light to come out of exile.

The 49-year-old posted a video on Instagram to mark his reemergence from the basement.

“All right, here it is, the official reentry from the basement, cleared by the CDC,” the 49-year-old stated in a video posted on Instagram.

“This is what I’ve been dreaming of, literally, for weeks,” the anchor continued. “My wife. She was cleared by the CDC. She doesn’t have a fever. She doesn’t have the symptoms anymore. … This is the dream, just to be back up here doing normal things.”

“I’m back,” Cuomo added after thanking his children for their good behavior.

On Easter, Cuomo got into a little bit of a confrontation with a man who gave him the business for being outside with his family despite his diagnosis. The man later filed a police report against Cuomo, which honestly, is pretty dang creepy.

Isn’t that something that the Nazis would’ve done? Calling the SS on neighbors who weren’t getting on board with the program? Regardless, something about that just feels…icky.

Anyway, this is great news. Setting aside the political angle for a moment, Cuomo is a husband and a father and fellow human being on this journey of life and we should wish him the best as he overcomes this awful illness. Every person who survives it is a mark in the win column.