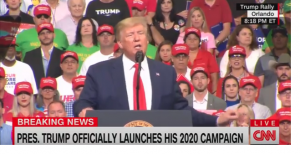 It seems like the folks over at CNN can dish out a lot of flak, but they sure can’t take it.

At the start of his rally speech yesterday at the Amway Center in Orlando, President Trump and a crowd of his supporters made the media feel a little squeamish.

“The fact is the American dream is back and bigger and better and stronger than ever before,” Trump told the crowd.

“As long as you keep this team in place, we have a tremendous way to go,” he continued, adding, “Our future has never ever looked brighter or sharper.”

Trump explained that his win in 2016 was not “merely another four-year election.” He said it was a “defining moment in American history.” Then, he pointed to the cameras at the back of the arena.

“Ask them right there,” he said of the media.

At that moment, the crowd broke out in a chant that was a little embarrassing for CNN, to say the least:

Although “CNN sucks!” has become something of a staple at Trump campaign events, this is the first instance in which the network actually halted its coverage of a rally over it.

“There is a lot of fake news back there” and that the “amount of press we have tonight reminds me of the Academy Awards before it went political and their ratings went down the tubes,” Trump added.

In a knee-jerk defense of the hilarious edit, CNN’s Brian Stelter claimed that the network simply cut to its panel for “analysis.”

After a "CNN sucks" chant breaks out at Trump's re-election event, Trump says "that is a LOT of fake news back there." CNN aired the first 6 minutes, then cut away for analysis. @JohnBerman pointed out that Trump reverted to his usual lines.

I’m sure the 37 people still stuck watching CNN during a layover at an airport are simply riveted by their journalistic integrity.