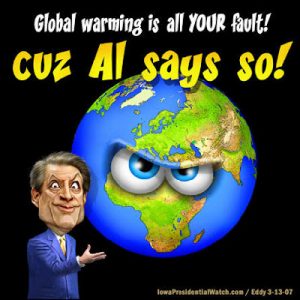 Blind Singer Stevie Wonder kicked off the recent star studded Hand In Hand telethon to raise money for hurricane recovery by getting political. Wonder started the show by saying, “Anyone who believes that there’s no such thing as global warming must be blind or unintelligent.”

The Hand In Hand telethon was run on every broadcast network to benefit victims of hurricanes Harvey, which devastated the Houston area, and Irma, which slammed Florida over the weekend.

Wonder wasn’t the only “blind leading the blind” participant who got political during the telethon. Singer Beyoncé contributed a video that started, “During a time when it’s impossible to watch the news without seeing violence or racism in this country. Just when you think it couldn’t possibly be worse, natural disasters take precious life, do massive damage, and forever change lives.”

Continuing, Beyoncé said, “The effects of climate change are playing out around the world everyday.” She then implied that climate change was behind the hurricanes, a monsoon in India and the recent earthquake in Mexico.

Hollywood mega-star Jennifer Lawrence. During an interview published on September 6, said this about the recent hurricane activity in the United States:

“It’s scary. It’s this new language that’s forming. I don’t even recognize it. It’s also scary to know that it’s been proven through science that climate change is due to human activity, and we continue to ignore it. And the only voice that we really have is through voting. And we voted. And it was really startling. You’re watching these hurricanes now, and it’s really hard not to feel mother nature’s rage, wrath.”

Lawrence attributes the hurricane’s destruction to mother nature’s rage. She thinks Mother Nature is raging because humans are ignoring “scientific” proof that we cause climate change.

A Wall Street Journal opinion piece recently explained this tendency to pronounce religious judgment on climate sinners like Houston who refuse to allow politicians to prescribe zoning laws. Regarding the recent destruction in Houston, we read:

“Harvey, the Storm That Humans Helped Cause,” said a headline in one progressive bellwether as the storm raged. An overseas columnist was less subtle if more clichéd: “Houston, you have a problem, and some of it of your own making.”

Dr. Jeff Masters, who received his Ph.D. From the University of Michigan in air pollution meteorology, is a co-founder of The Weather Underground. On Friday, September 8, he was quoted in an AP story as follows:

“Nature’s gone crazy,” mused Jeff Masters, meteorology director at the private service Weather Underground. “Welcome to the future. Extreme weather like this is going to be occurring simultaneously more often because of global warming.”

The problem with Dr. Masters’ statement is that the statistics reveal there is no detectable increase in hurricane activity. The Wall Street Journal article quotes Roger Pielke, Jr., who affirms the research and conclusions of the IPCC that manmade greenhouse gas emissions cause climate change (IPCC = The Intergovernmental Panel on Climate Change — a scientific and intergovernmental body operating under the auspices of the United Nations).

As Roger Pielke Jr. has noted, the link between global warming and recent hurricanes and extreme weather events is “unsupportable based on research and evidence.” Mr. Pielke, who is no climate-change denier, has shown with data that hurricanes hitting the U.S. have not increased in frequency or intensity since 1900, there is no notable trend up or down in global tropical cyclone landfalls since 1970, and floods have not increased in frequency or intensity in the U.S. since 1950.

“Climate change denial should be a crime,” declared the Sept. 1 headline in the Outline. Mark Hertsgaard argued in a September 7 article in the Nation, titled “Climate Denialism Is Literally Killing Us,” that “murder is murder” and “we should punish it as such.”

“In the wake of Harvey, it’s time to treat science denial as gross negligence — and hold those who do the denying accountable,” said the subhead in the Outline article, written by Brian Merchant.

John Livingston writes: “But Pielke isn’t the only sane voice in the crowd. The Wall Street Journal piece also quotes the National Oceanic and Atmospheric Administration (NOAA), which resides within the US federal government’s Department of Commerce:

The National Oceanic and Atmospheric Administration recently said that “it is premature to conclude that human activities—and particularly greenhouse gas emissions that cause global warming—have already had a detectable impact on Atlantic hurricane or global tropical cyclone activity.”

And finally, just to prove its point, the WSJ piece references the IPCC as saying that we can’t prove global warming is making weather worse:

No less than the United Nations Intergovernmental Panel on Climate Change says it lacks evidence to show that global warming is making storms and flooding worse. But climate scolds still blame Harvey on climate change because, well, this is what the climate models say should happen as the climate warms.

In the face of the facts, what we see from climate-change activists is a religious-like commitment to a belief that claims support from a (simplified) mathematical model, but which the evidence and facts simply don’t confirm.

Liberals believe in climate change. They believe their models accurately predict that manmade global warming will make storms and weather worse. They say that’s a bad thing, and therefore we should surrender our personal liberty and empower the government to take even greater action to prevent a disaster that may wipe our species from the face of the earth.

But even though manmade CO2 emissions have not ceased, and continue to increase, the storms haven’t actually gotten worse. Yet they insist, despite the apparent facts, that they are worse.

This is religious faith, not science.

If it’s not just the physical laws, as interpreted by humans, that Mother Nature is obeying, we are assured that she is also watching the outcome of our political process, too. Jennifer Lawrence in her recent interview has basically said that the Houston hurricane landed as a result of the US voting to elect Donald Trump as President.

How much more confirmation do we need, they keep asking us. Mother Nature obeys our science, and she is also on the side of our liberal politics. Being female herself, she really wanted Hillary Clinton to win that election.

Nature obeys our liberal scientism. Nature prefers our liberal political views. What more do we need to finally thrust off our antiquated conservative values and come into the New Age? All that’s missing to make this argument sound are the facts. Proof. Evidence.

Mercy, it appears only the blind leaders of the blind can save us by saving our planet from this global warming hoax!

(Much of the material for this article were excerpted from an article by Jonathan Livingston at:(https://garydemar.com/scientific-facts-contradict-climate-change-faith/)