Climate Change Skeptics More Likely to Be Eco-Friendly Than Alarmists 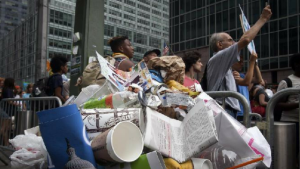 This story could be summed up like this: individual responsibility is a far better philosophy to have when you’re looking to make change.

You see, whatever cause du jour a progressive has, they tend to put the onus on others to make that change happen. Not only do they rely on the government, they also rely heavily on guilt-tripping other people as a means to achieve their ends.

Doesn’t sound very effective, does it?

Well, when it comes to climate change and environmentally friendly behavior, a new study shows that this is indeed, quite ineffective.

“A study by Cornell and the University of Michigan researchers found that those “highly concerned” about climate change were less likely to engage in recycling and other eco-friendly behaviors than global-warming skeptics,” The Washington Times reports. “The skeptics were the more likely than the ‘highly concerned’ to recycle, use public transportation and reusable shopping bags, and buy eco-friendly products.”

You mean to tell me that these climate alarmists aren’t even recycling their green detox juice cups, bringing their own bags to Whole Foods, or riding the bus with the peasantry?

“These results suggest that different groups may prefer different strategies for addressing climate change,” said the paper. “Thus, belief in climate change does not appear to be a necessary or sufficient condition for pro-environmental behavior, indicating that changing skeptical Americans’ minds need not be a top priority for climate policymakers.”

This should be good news for Noam Chomsky, who recently informed a group of university students that Republicans and Christians were literally destroying the world due to their climate change skepticism.

Turns out, we’re the ones actually recycling, you old kook!

Tom Jacobs of the Pacific Standard put it perfectly in his commentary on the study, urging us to “remember that conservatism prizes individual action over collective efforts.”

“So while they may assert disbelief in order to stave off coercive (in their view) actions by the government, many could take pride in doing what they can do on a personal basis,” he said explained.

And that’s it right there.

Conservatives, who are more likely to be climate skeptics than liberals, are the ones actually recycling because we’re the ones who take responsibility for our own actions.

Liberals just want the government and other people to do it, remember? Think about it: from abortion to immigration to LGBTQ issues to climate change, liberals always think the solution to their favorite issues is for other people to change. Never will you hear a liberal say hey, maybe I can make the world a better place if I work hard and take responsibility for my own actions!

They also love to virtue signal, of course, and attacking the moral character of conservatives is a favorite way of virtue signaling.

You don’t even need to do anything to effect social change anymore, just point the finger at conservatives or Christians and call it a day!

Unless, of course, they’re recycling when you do it, then that would be kind of awkward.