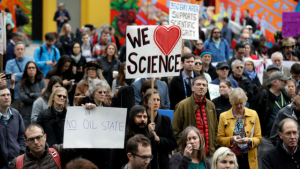 Just in case you were unsure whether or not to take climate alarmists seriously, they’ve teamed up to make sure that everyone knows they refuse to have their theories tested by healthy intellectual debate.

Oh, and they want to make sure the media won’t compare the opposing ideas of climate alarmism and climate skepticism anymore.

Now, I’m not saying this automatically makes climate alarmists wrong…but I am saying they’re a bunch of weak-kneed fraidy-cats who are much better at sensationalistic rhetoric than they are at defending their ideas in a public forum.

Dozens of politicians, environmentalists, scientists and other global warming activists signed a letter announcing their refusal to take part in public debates with people critical of their global warming claims — in the name of science, of course.

“We are no longer willing to lend our credibility to debates over whether or not climate change is real. It is real. We need to act now or the consequences will be catastrophic,” reads the letter signed by 60 self-described “campaigners.”

The letter, published in The Guardian on Sunday, calls on the media to end the “false equivalence between an overwhelming scientific consensus and a lobby, heavily funded by vested interests” when it comes to global warming.

“As campaigners and thinkers who are led by science and the precautionary principle, and who wish to debate the real and vital issues arising from human-triggered climate change, we will not assist in creating the impression that climate denial should be taken seriously by lending credence to its proponents, by entertaining ideas that lack any basis in fact,” they wrote.

“Therefore we will no longer debate those who deny that human-caused climate change is real. There are plenty of vital debates to be had around climate chaos and what to do about it; this is simply no longer one of them. We urge broadcasters to move on, as we are doing,” they wrote.

Perhaps the idea that the debate is over and we need to move on and save the planet would hold just the teensiest bit of merit if it hadn’t been the bulk majority of their rhetoric for as long as the idea of climate change/global warming/the next ice age has been tossed around neo-fascist intellectual circles who want to regulate the ever-loving heck out of everything ever and rely on alarmism to justify to Americans why they need to give up their rights.

They’ve literally always employed the narrative that climate skeptics are a bunch of uneducated hillbillies with their heads in the sand who are also somehow on the payroll of Big Oil (have you gotten your check yet? I’m still waiting…).

You’d think that if someone was confident they had the stronger argument, they’d enjoy mopping the floor with their intellectual opponent every opportunity they got.