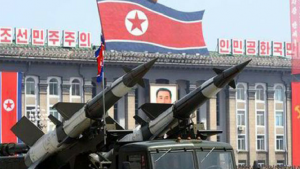 This is probably the most insane thing you have ever heard from the global warming camp, and that’s saying something.

There’s way to tiptoe around what climate alarmists are now warning about North Korea’s potential denuclearization.

They warn that if the impoverished, brutally oppressive, isolated communist dictatorship were to denuclearize, you see, sanctions would be lifted, and then they’d be able to buy coal.

And in the process of actually providing a desperately poor population that’s been living in the stone age with energy to cook food and heat their homes, they’d be contributing to greenhouse gases.

We simply allow…North Korea to continue their nuclear programme.

It’s for the planet, you guys.

“Easing sanctions would allow North Korea to export coal and provide electricity to its oppressed population, foreign policy experts told E&E News in an article trying to connect the Paris climate accord to negotiations with the Koreans,” Western Journal reports.

“However,” they add, “Daniel Kish of the free-market Institute for Energy Research pointed out North Korea’s communist dictatorship has kept its people poor, and largely without access to electricity, for decades.”

E&E News reported that the concern is that the U.S. and our allies will end up building a coal-fired electrical grid in North Korea due to it’s high-quality coal reserves, but, as Western Journal points out, “is anyone really worried about the carbon dioxide emissions from increasing North Korea’s standard of living?”

“Next we’re going to hear about how Venezuela’s carbon emissions are going down because socialism works so well,” Kish joked–but would it really be that unbelievable at this point if someone actually said that?

Seriously though, how psychotic do you have to be to be more concerned about carbon emissions than you do about an entire nation of starving people and a dynasty of madmen trying to build nuclear weapons while keeping their own population under brutal oppression?

This is the anti-human, sociopathically anti-Trump rhetoric we’ve gotten used to in the Trump age, and yet the cognitive dissonance never cesases to be unbelievably stunning.

And they wonder why we’re skeptical of their climate alarmism.