Climate Alarmists Are Gluing Themselves To Jets Over In Britain. Seriously. 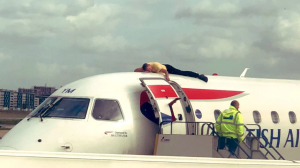 Climate hysteria advocates are stepping up their game.

While not quite as ominous and violent as their fellow leftist Antifa comrades (for now, anyway,) they’re really making some big strides in putting their own lives on the line to cause mild to moderate inconveniences for the rest of the world so they can have a few anecdotes for the grandkids they’ll probably never have.

The latest very stable genius did his part for Mother Nature by climbing on top of a British Airways plane at London City Airport on Thursday, with some reports claiming he glued himself to the fuselage.

The stunt is part of a greater demonstration from climate change extremist group Extinction Rebellion, leading to major roads and bridges being blocked in the British capital for a few days.

It's an eventful day at work. A guy has glued himself on top of a plane at London City Airport just across from me. #londoncityairport pic.twitter.com/2ctJkIop73

“Oh man, I’m shaking… This is all about the climate and ecological crisis,” said the protester, Paralympic athlete James Brown, said from on top of the airplane according to CBS News, who pointed out that Brown was a Bronze medalist but didn’t seem to find it relevant that he was also banned from the Paralympics for two years for evading a doping test.

Hmm. They also failed to provide the hilarious sentences uttered just a few moments before, offered to us by the less-prudish Australian:

“OK, here I am, top of a f***ing aeroplane at City Airport. I hate heights, I’m shitting myself. I managed to get on the roof. Oh man I’m shaking.”

According to The Australian, Brown also took part in an attempt last month to shut down Heathrow Airport with toy drones, filming the incident and live-streaming it to Facebook.

“My early understanding is somebody has been arrested after they presumably bought a ticket, went through security perfectly normally, went up the steps of a plane and hurled themselves on top of a plane,” she said according to the BBC. “Actually, that was a reckless, stupid and dangerous thing to do for all concerned.”

The London City Airport, mostly used by business commuters, was the target of what Extinction Rebellion activists call a “Hong Kong style” demonstration designed to shut the place down last week.

Other protesters glued themselves to fixtures inside the airport, BBC also reported.

Outside London City Airport. Looks like #ExtinctionRebellion protesters are beginning what they say will be a 3-day “Hong Kong style” occupation. Major police presence here pic.twitter.com/9FnT66tnVV

Another protester caused a two-hour delay on an Aer Lingus flight when he refused to take his seat.

My flight from London City airport to Dublin has just been grounded by a climate change protestor. On runway and about to take off when smartly dressed man in late middle age stood up with iPhone to deliver lecture on climate change up and down aisle

After the plane had taxied back to the gate, the man was removed and presumably arrested. Overall, approximately 50 activists were arrested at the airport on Thursday, 29 of whom had been charged.

I’m starting to wonder if these whackamoles call themselves “Extinction Rebellion” because they’re going to kill themselves off with idiotic stunts like this. Clever.