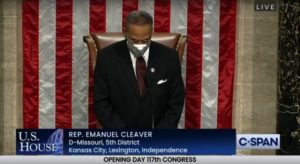 Rep. Emanuel Cleaver, a Democrat, said that all of the negativity surrounding his thoroughly ridiculous opening prayer for the 117th Congress on Sunday was the result of “orchestrated outrage” over saying “Amen and a-woman.”

Or, and just hear me out a little on this, maybe people are ticked off because you made a mockery of God and misused a sacred word from the Scripture? Just a thought.

“I say that we we have a society now that participates in orchestrated outrage,” Cleaver, an ordained United Methodist minister, told Fox News host Neil Cavuto on Tuesday.

Claiming that “99.999 percent of the people who are expressing outrage didn’t even hear the prayer” in which he invoked the name of a Hindu god, Cleaver said, “The prayer wasn’t for them. I’m talking to God on behalf of Congress, asking for unity, and so forth, asking God to give us that strength to do that. Then I ended the prayer by saying, ‘Amen.’ We have a record number of women in Congress, including the first chaplain in 240 years of the United States’ history, and it goes actually back to the colonial Congress, and we’ve just gotten a first female chaplain in the House and that’s—”

“All that’s well and good, congressman,” Cavuto interrupted. Urging Cleaver to address the fact that the word “amen” is a Hebrew word that translates “so be it,” and has nothing to do with gender, Cavuto asked, “Were you just making a point here, or were you saying something bigger? Because a lot of people took offense, they were saying, ‘Well, now he’s trying to gender-proof God.’”

Once again, Cleaver deflected and placed the blame on those offended by his blasphemous prayer by saying, “No, and that’s what I’m saying. People want to simply—in our society now, we look for opportunities to be outraged.”

Cleaver did concede the historical definition of “amen,” but said that his coining of the term “a-woman” was “intended to recognize the record number of women now in Congress,” as well as reference to the new female chaplain in the House.

He went on to whine that everyone just adored his awful prayer until it went viral on Twitter where it was ripped apart. He said the intent of “a-woman” was just meant as a lighthearted pun.

The thing is, it’s not only the “a-woman” part that is wrong with Cleaver’s prayer. The whole praying to false gods is offensive. Then mocking the Christian and Jewish faiths by desecrating a sacred word just takes things to a whole new level.

Shame on you, Cleaver. Truly.