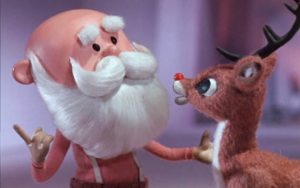 When I was a kid, both the song and ancient stop-motion animation Christmas classic “Rudolph the Red-Nosed Reindeer” were favorites of mine.

I loved the bouncy tune and the fun message that after all the other reindeers were mean to Rudolph, they figured out his weird nose was actually a big help since Santa’s sleigh is apparently not equipped with high beams.

No adult had to explain to me that the message of the song and corresponding movie was about not judging someone by their looks.

Pretty simple and straightforward and something you think today’s progressives would be all about.

After all, aren’t they currently criticizing us for judging people who just want to cross our border illegally, because they might be the people we need to scrub our toilets or something?

Sadly, the good folks at HuffPo are apparently so wrapped up in their determination to find things offensive and ruin literally everything that they’ve completely missed the point of the “Rudolph” movie and are now lecturing us about how mean the reindeer are to Rudolph.

“‘Rudolf The Red-Nosed Reindeer’ is a holiday classic that returns to TV each holiday season,” the video explains. “But lately, viewers are noticing the tale may not be so jolly after all, and they’re sharing their observations online.”

(Does anyone else doubt these people actually exist?)

“Former fans are pointing out Rudolph’s father verbally abuses him,” the video continues.

They also find it “problematic” that Rudolph’s friends bully him.

They are aware every good story starts out with conflict to be overcome by the hero, right?

The folks who cut the video, rather than realize the point once the reindeer repent of their ill treatment of poor Rudolph when his red nose proves useful, find his usefulness to Santa to be problematic as well.

“In the end, Rudolph & friends learn the bitter truth…” the video says, then displaying a tweet that says, “deviation from the norm will be punished unless it is exploitable.”

Twitter users did not go easy on these clueless snowflakes:

Something is seriously wrong with you people…..

Seriously. Is it a slow month for cultural appropriation or something?