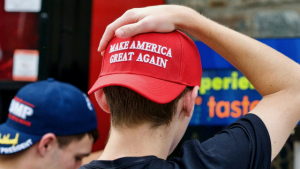 Those on the right and the left were stunned by a viral video of a grown man assaulting a teenager in a Texas Whataburger for the carnal sin of wearing an iconic red “Make America Great Again” hat; a sure sign of Nazi alliance to hysterical anti-Trump leftists.

The man who ripped the hat from the teenager’s head and threw a drink in his face amid a string of profanities, 30-year-old Kino Jimenez, has now been arrested and charged with felony assault on top of losing his job and having his angry, violent acts blasted across the internet.

While the victim, 16-year-old Hunter Richard, was left unharmed by the incident and garnering national support and sympathy even from Donald Trump Jr., has so far been left without his MAGA hat, which was never returned to him.

He has now received an incredible replacement–signed by the Don himself:

#Update: Teen who made national news after having #MAGA hat stolen at a San Antonio fast food restaurant just got this in the mail. A hat signed by @realDonaldTrump.

With a full plate, Trump still had time to think of this unfairly attacked young supporter.