City Of Charlottesville Might Remove Statues Of Stonewall Jackson And Lee 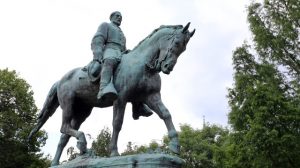 The city of Charlottesville is now legally allowed to take down statues of two Confederate generals according to a ruling handed down by the Virginia Supreme Court.

This decision overrules one that came from a state circuit court decisions that had previously prevented the removal of Robert E. Lee and Thomas “Stonewall” Jackson statues located in the city. Both of these statues were at the heart of the “Unite The Right” rally that was held in Charlottesville back in 2017 where white supremacists who were opposed to the removal of the statues clashed with a group of counterprotesters.

Neo-Nazi James Fields Jr. killed protester Heather Heyer at the rally when he ran his car into a crowd of counterprotesters.

“In the present case, the statues were erected long before there was a statute which both authorized a city’s erection of a war memorial or monument and regulated the disturbance of or interference with that war memorial or monument,” Supreme Court Justice Bernard Goodwyn stated in the court’s judgment. “The Lee Statue and the Jackson Statue were not erected pursuant to [the aforementioned law] and so, the prohibitions against disturbing or interfering with monuments or memorials erected pursuant to [that law] do not apply to the statues.”

The Charlottesville City Council voted in February 2017 to remove the statue of Lee from Lee Park, which had been erected in 1924, and to rename and redesign Jackson Park, where a statue of Stonewall Jackson was erected in 1921.

A group of residents sued the city after the vote to stop the statues’ removal, and the circuit court ruled in their favor.

Folks, removing statues does not help our society move forward. You cannot erase our history and expect not to repeat the mistakes of the past. Heroes and villains are real, but they are far and few in between.

Most figures in history were just people. Flawed people. Just like you and me. They had ugly spots just like we do. We can’t just pretend like a person’s whole life and personal character can be summed up in a few actions, good or bad. There is simply more to us than that.