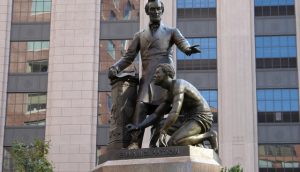 The Boston public arts commission took a vote this summer to remove a statue of President Abraham Lincoln emancipating a slave from a downtown area display. It was unanimous.

Today, the statue has been removed.

“The decision for removal acknowledged the statue’s role in perpetuating harmful prejudices and obscuring the role of Black Americans in shaping the nation’s freedoms,” the commission explained in a publicly released statement.

Boston’s Democratic Mayor Martin Walsh praised the commission’s decision over the summer, saying, “After engaging in a public process, it’s clear that residents and visitors to Boston have been uncomfortable with this statue, and its reductive representation of the Black man’s role in the abolitionist movement. I fully support the Boston Art Commission’s decision for removal and thank them for their work.”

“The Mayor’s Office of Arts and Culture and the Boston Art Commission began a public engagement process over the summer that led to the decision to remove and relocate the Emancipation Group statue. … As expressed by so many during the public process this year, we fully agree that the statue should be relocated to a new publicly accessible location where its history and context can be better explained. The statue is being stored in a controlled storage facility in South Boston until a new location is determined,” a spokesperson for the mayor’s office said.

The statue, known as the Emancipation Group, the Emancipation Memorial, or the Freedman’s Memorial, is an 1879 copy of an original that was erected in Washington, D.C., in 1876 during a ceremony that featured an oration from Frederick Douglass.

Another interesting historical tidbit that is being left out of the discussion about this statue is who paid for it.

The money that was used to pay for the creation of the original statue this one is a copy of, came from freed slaves. Archer Alexander, a slave who escaped his situation and then joined the Union, served as the model for the artwork.

The main reason the statue was taken down was due to the slave kneeling before Lincoln, which upset folks in the Black Lives Matter movement. You know, the same folks who have been burning down their neighborhoods and looting everything in sight since spring of this year?

These folks want to erase history and rewrite it. It’s always the motive of the radical left to try and change the past, in order to help get their claws deep in present generations so they can control the future.