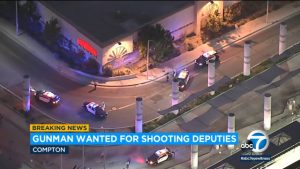 The city manager of Lynwood, California, which just so happens to be located very close by the Compton area where two sheriff’s deputies were shot in the head Saturday evening, posted a meme on his Instagram account featuring a picture of Malcom X with the caption, “Chickens Come Home To Roost.”

Jose Ometeotl, the manager of Lynwood, wrote in the post — which was later deleted — “The fact that someone randomly opened fire on deputies is to be expected in the society we live in today.”

Yeah. This guy is a real dirtbag, isn’t he?

The shooting of anyone is a wholly unacceptable occurrence in society. I do not condone the type of violence seen in the shooting of the deputies in Compton. I will say that communities like Compton have been plagued by deputy gangs that inflict fear and violence in the community. These deputies murdered, framed and stole from the community just because they could. Good deputies never turned on bad deputies for fear of retaliation and when caught most of these bad deputies kept their jobs and continued on their criminal career.

The fact that someone randomly opened fire on deputies is to be expected in the society we live in today. The political climate and leadership of Sheriff Villanueva has only sowed the seeds of anger and frustration in the community. I pray for the deputies and their families while still demanding justice for Andres Guardato, Breona Taylor, Tamir Rice, Ahmaud Arbery …

NEW: Jose Ometeotl, the city manager of Lynwood, posted on his Instagram that “Chickens come home to roost” following the ambush shooting of two LASD deputies in Compton. One is a 31 y/o mom of a young boy, the other is a 24 year old male deputy, both very new. @FOXLA pic.twitter.com/CpMmmEZp5z

This kind of behavior from a city manager is totally appalling. However, it’s what we have come to expect from the modern-day Democratic Party, which has been infiltrated by radical progressives who have infected it with a Marxist worldview that sees police officers as enemies to the completion of the transformation they desire to see in our country.

At the end of the day, these folks want to get rid of cops so they can create more chaos. More chaos leads to more fear. More fear results in good people willingly handing over liberty and power to those in charge in exchange for the illusion of security.