City Crushes Young Entrepreneur, Shuts Down Lemonade Stand For Not Having Permit 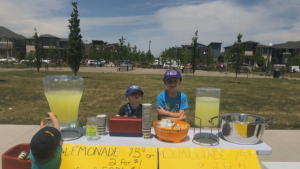 Big government bureaucracy is the ultimate dream killer, especially for entrepreneurs who are interested in actually contributing to society and building businesses that employ others and create jobs.

It’s bad enough to see a person broken by the process and losing their dream as an adult, but what about when the government crushes the dreams of a child and snuffs out the spark of entrepreneurship before it even has time to develop?

This is precisely what happened to a child’s charity lemonade stand when it was shut down for not having a permit.

According to CBS Denver, “Denver police shut down a lemonade stand put on by a group of brothers over a permitting issue.”

Jennifer Knowles, the mother who helped her sons erect the lemonade stand, said she wanted them to learn a little bit about entrepreneurship and charity. Little did she know they would learn a tough lesson about the heartlessness of Uncle Sam.

“The boys went online and they decided they wanted to help a child in another country less fortunate, and we found a place in Colorado Springs called Charity International, and they picked a five-year-old boy in Indonesia,” she said.

Despite the inherent innocence and good nature of this lemonade stand, a miserly Scrooge yelled “bah humbug” to the police, resulting in the boys’ charitable operation being shut down.

“Someone complained about our lemonade stand,” said Knowles.

When the police showed up, they told the two tykes that they need a permit to sell lemonade, comparing their stand to hot dog, peanut and sunflower seed vendors outside Coors Field.

“The city says it’s about health and safety, but in the Knowles’ case, competition may also be in play,” reports CBS Denver. “The Knowles set up right next to the Denver Arts Festival, where there was a lemonade vendor.”

This is the sort of thing that will make these kids think twice before starting their own companies one day, which ultimately cheats all of us as consumers, especially if they end up having great and innovative ideas they never act upon.

How horrible for their first experience in the business world to be such a negative one.