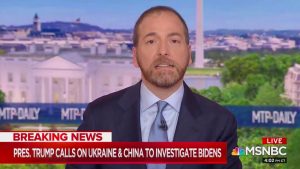 It is with the deepest solemnity and severity that I declare that Chuck Todd is a potato.

See how that works? Strong language doesn’t necessarily make something true, but you’d think it does going by the shirt-rending language Dem pundits like Chuck Todd are using to describe President Trump’s calls for other countries to reopen their investigation into the Bidens’ shady dealings there.

The MSNBC anchor began his Thursday afternoon edition of MTP Daily by oh-so-seriously telling his audience that Trump’s public call for China to investigate Joe Biden placed America squarely in the center of a “national nightmare.”

“I do not say this lightly,” Todd began. “Let’s be frank, a national nightmare is upon us. The basic rules of our democracy are under attack, from the president.”

"Let's be frank: a national nightmare is upon us," @ChuckTodd said tonight. "The basic rules of our democracy are under attack, from the President." pic.twitter.com/UMcMpk8LMp

“Donald Trump is using the power of his office to solicit interference in the 2020 presidential election—while doing it relying on a debunked conspiracy or two,” he said. “This is not hearsay or a whistleblower’s complaint or a memorandum of a phone conversation. You heard the president do it himself on the White House lawn.”

Noting that Republicans have supposedly “failed” to condemn Trump’s actions, Todd further lamented that this was “remarkable considering the precedent it would set and the lasting damage it would do to our democracy.”

“It is tough to say lightly,” he sighed. “But this is the moment we are at.”

Is it really, now? Funny, I hadn’t noticed the sky falling.

CNN’s chief media correspondent Brian Stelter shared the clip of Todd’s woeful soliloquy in a tweet that, as it should be, was promptly roasted.

A national emergency? Not if you ask the People of Twitter™

Let’s be frank. Y’all invited this pud on CNN 100+ times…and then said he had to be considered a serious candidate due to his many cable TV appearances pic.twitter.com/03KbDhlTka

Oh my word, thank goodness we don’t have to worry about Avenatti 2020.

Trump is revealing the public corruption of the establishment. This is very upsetting to CNN

Trump will now sit back and laugh as the political elitists (through their media lapdogs) take strong opposition to investigating corruption within their ranks.

As AG Barr simultaneously uncovers the extent of the 2016 election interference welcomed and paid for by the DNC.

And it will be glorious.

I remember when Democrat operatives like Chuck Todd were telling us that investigating foreign interference in the 2016 election was a good thing.

Do you remember? Frank Hart remembers.

How dare he investigate corruption. The audacity!

Not only is it legal for a president to request assistance from nations with which we have cooperation treaties to investigate potential US officials' corruption abroad, it's his Constitutional duty to do so.

Mueller did with 13 other countries

Tired of being lied to yet?

And, last but not least, my personal favorite: