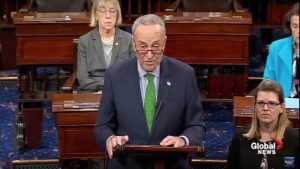 Senate Minority Leader Chuck Schumer is calling on Republicans to stop their support for President Donald Trump and his various legal challenges to the media called result of Joe Biden as the new president, stating that their refusal to move on is damaging the country.

Yeah, well, voter fraud is also damaging the country, in a far more dangerous manner, so perhaps we should let the system work and run its course, eh?

“The Republican refusal to deal with reality is hurting our country in many ways: fighting the health crisis of COVID, improving our economy, and not compromising on national security,” Schumer, a New York Democrat, told reporters on Thursday. “It’s time to move on and get to work for the American people.”

Schumer said Trump’s legal challenges “are being laughed at in court,” and he called the lawsuits “frivolous,” with “less than a snowball’s chance in hell of succeeding.”

“Let me speak directly to my Republican colleagues in the Senate,” Schumer said. “Once again, Joe Biden has won. Now, move on and work with us to solve the COVID crisis. Let us bring the country together and get things done. Hundreds of thousands are getting sick. Thousands are dying. We don’t have time for these kinds of games. The American people are waiting for relief from the COVID virus.”

The Democrats, who for four years called folks who supported Trump a racist, bigot, homophobic, misogynist, and racist suddenly want to cozy up and be pals now that Biden has “won” the election?

Yeah, that’s not how this works, Schumer. Not at all. Why in the world would folks on the right want to partner up with people who slandered them for four years, without even issuing an apology?

Good luck with that.