Did Chuck Schumer ruin your Thanksgiving? 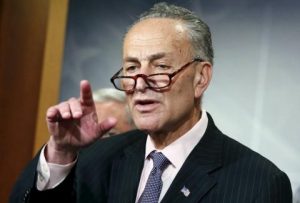 Sen. Chuck Schumer was hoping to ruin your Thanksgiving dinner! He tweeted that everyone should print off a tax chart to show to your family member that brings up politics during the Thanksgiving gathering.

“Bring this chart to Thanksgiving dinner. It’ll come in handy when that family member who always talks politics tells you the Republican tax bill helps the middle class,” he tweeted.

Bring this chart to Thanksgiving dinner. It’ll come in handy when that family member who always talks politics tells you the Republican tax bill helps the middle class. pic.twitter.com/2EpZ5PxcDY

How many Americans were really looking for an opportunity to ruin Thanksgiving Chuck? He cares so much for lower income Americans that Thanksgiving should be ruined with a tax chart demonstrating their plight. I wonder how compassionate he would feel if his maids, housekeepers, and cooks were taken away from him on Thanksgiving.

Maybe this chart will save all of our Thanksgivings instead.

Don't forget to bring this one, also. Who currently pays the most taxes?https://t.co/zNPtByv9fy pic.twitter.com/w69pRo5q00

Perhaps this tweet can also be our holiday salvation.

Bring this photo to Thanksgiving dinner. It’ll come in handy when that family member who always talks politics tells you the Democrats respect women. pic.twitter.com/vZlSvbLCSi

I'm showing up with this one. It's clear DC needs one big audit, drained, and term limits. Apparently transparency is a load of crap to knpoliticians and feel they should live by a separate set of rules and laws then the rest of us. pic.twitter.com/rthDy9QPFQ

Then the common sense continues.

The more I think about it Chuck Schumer just reminds us all how badly we need term limits.

Good job, Chuckles. Way to de-escalate Bird Day tensions by adding a molotov cocktail to the equation,” said a post at Louder with Crowder, adding:

We already have to deal with lengthy lectures about the atrocities committed against the red man. On top of the shade we get for not being “with her” last year. Half the time, you and your lefty relative are two seconds away from cracking each other’s skulls with turkey legs. Fighting over the wishbone… to wish away the patriarchy.

Most of us are happy to put politics aside for one day. Watch some football. Eat some bird. Try to tolerate cousin Gaylord, who can’t stop talking about his fair-trade hemp cardigan and the gas mileage of his new Tesla. Everyone hates you.