Christine Blasey Ford Had “Nothing to Gain” By Accusing Kavanaugh. Now She Has $1M and a Book Offer. 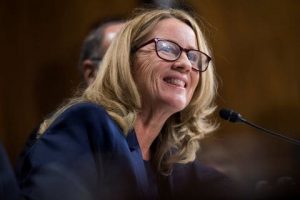 I don’t mean to gloat but…I totally called this.

Not necessarily due to my great intelligence, but more due to the fact that this was entirely predictable.

Christine Blasey Ford, the woman who accused now-Justice Brett Kavanaugh of sexually assaulting her at some point in the early 80’s with no corroborating witnesses or details other than that she was certain it was him, originally claimed she was inspired to speak out of a sense of “civic duty” and that she had “nothing to gain.”

The Democrats made sure to underscore that point when she appeared before the Senate Judiciary, after all:

“You had absolutely nothing to gain by bringing these facts to the Senate Judiciary Committee,” Sen. Dick Durbin said to her.

“Clearly [you] have nothing to gain for what you have done,” echoed Sen. Kamala Harris, after thanking her for her “bravery.”

That “nothing” that Ford had to gain appears to have been “something.” $1 million, in fact.

As Real Clear Investigations reported on Monday, “Ford stands to gain some $1 million and counting from national crowdfunding campaigns launched by friends and other supporters, while she is said to be fielding book offers.”

The potential seven-figure windfall, which she says she intends to cash in on – while still asking donors for more money – has some questioning her motivation for accusing the conservative judge after 35 years of silence, and whether it goes beyond personal or even political justice. Others worry the largesse sets a dangerous precedent: Crowdfunding, which unlike political donations is unregulated, could be routinely used in the future as a bounty for providing political dirt on opponents.

Two GoFundMe accounts have raised more than $842,000 for Ford, and the money is still coming in weeks after she testified and left the spotlight. The total does not include a third account collecting $120,000 for an academic endowment in her name.

“The costs for security, housing, transportation and other related expenses are much higher than we anticipated and they do not show signs of letting up,” Ford said in a recent statement posted on the GoFundMe page of the “Help Christine Blasey Ford” campaign, which is still bringing in donations. “Funds received via this account will be used to help us pay for these mounting expenses.”

As the Daily Wire notes, this is all cold, hard cash with which Ford and her husband can do what they wish; her attorneys worked pro-bono, remember?

Ford didn’t have many expenses. All of her legal fees and a polygraph examination were paid for by Democratic attorneys assigned to her by the Democratic members of the Senate Judiciary Committee, RCI wrote. And “panel Democrats were allotted half of a $1 million committee fund for transportation, security, investigations and other expenses associated with the tumultuous confirmation process. The Senate Sergeant at Arms and Capitol Police also provided ‘heightened security’ for Ford.”

For someone with nothing to gain…she sure cashed in, and will likely continue to do so for some time.