Chris Wallace Not Happy With Trump Claiming Early Election Victory, Says He ‘Threw A Match’ Into A ‘Flammable Situation’ 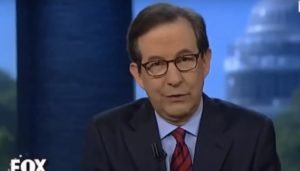 Fox News host Chris Wallace, like many figures in the mainstream media, were not too pleased with President Trump’s statements in the early hours on Wednesday morning in which he declared victory in the 2020 election despite the fact that many major states have yet to be called for either of the candidates.

The president appeared at the White House around two in the morning where he delivered remarks stating that he believes he’s won the 2020 election, a comment that has earned criticism from many in the media, including Wallace.

“This is an extremely flammable situation, and the president just threw a match into it,” Wallace said. “He hasn’t won these states. Nobody is saying he won the states. The states haven’t said that he’s won. This goes right back to what Joe Biden said, which is that the president doesn’t get to say that he’s won states, you know, the American people get to say it.”

Wallace also challenged Trump’s vow to go to the Supreme Court to stop the counting of ballots, saying it’s not a matter “the courts would allow.”

As of early Wednesday morning, several swing states have not yet been called, including Georgia, Pennsylvania, Wisconsin, and Michigan. Neither Trump nor Democratic nominee Joe Biden has the 270 electoral votes to clinch victory.

Wallace may have a point on this one. It’s definitely too early to say for sure who the winner of the election is going to be, especially with Pennsylvania still being up for grabs at the time of this writing.

However, the big concern at the moment seems to be whether or not the delay in counting votes is being used by liberals as an excuse to possible play around with ballots and results.

There’s no evidence right now to suggest that is happening, but it’s certainly possible. Let’s hope that’s not the case and that the integrity of our election system is still holding true.