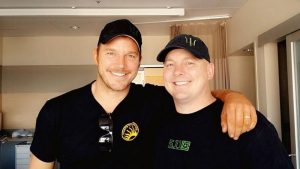 Contrary to what most folks seem to think, yesterday was not just a day to nab free food and a good deal on a new toaster.

Veterans Day is the day on which we honor and thank those around us who have paid for our safety and national interests with a portion of their lifetime.

Looking at our veteran suicide rates, the criminally inept failures of Veterans Affairs, and a powerful cluster of Democrats who all of a sudden don’t want to bring any troops home as long as it’s a Republican waving the pen, it’s clear that we need a lot more than words and small gestures to pay these men and women back.

But, words and small gestures are a start. Few used them better yesterday than, of all people, Hollywood star Chris Pratt.

We already love Pratt for his jokes (of which he is often the butt,) his faith, and his unapologetic patriotism.

Pratt’s Veterans Day tribute to his own brother, Cully Pratt, however, denied himself any attention or praise and instead directed our attention to these everyday heroes.

“This is my older brother Cully. #happyveteransday,” Pratt began in an Instagram post, captioning a photo of his big brother at what looks like the early days of his nine-year career in the Army.

“I always wanted to be exactly like him. We were the same size despite our three year difference in age so as a kid I would wear the same clothes he wore, literally the day after he wore them — picking them up off the floor in his room. What can I say? He knew how to match and I liked the smell,” Pratt continued. “One day his friends started to notice and he kindly urged me to wear my own clothes.”

“He is a good big brother. He’s always led with love. Growing up we wrestled for hours every day and smashed every bit of furniture in the house but never actually fought,” he went on. “He taught me everything. He put up with me and my incessant hyperactivity and forced his friends to do the same.”

“I say all this to point out that he’s a real person,” Pratt explained. “And the more we can look at our veterans for who they are, actual people, with siblings and parents, with children and funny pasts- the more we can approach our relationships to them with compassion and understanding.”

“My brother didn’t join the Army because he wanted to be Rambo,” he continued. “He joined because it was an opportunity for a hard-nosed kid who couldn’t afford college, somebody who wanted to get the hell out of his small town and probably wanted his own clothes.”

“We have the greatest armed forces the world has ever seen,” Pratt declared. “It’s made up of real people who joined for myriad reasons. Brave men and women who sacrifice a whole hell of a lot. Today is their day. So celebrate a veteran today.”

“Today I celebrate Cully, as well as my cousin Curtis, Uncle Steve, Uncle Skip, second Cousins, Joey, Ryan and Alex, besties Jared and Jeffrey, all those I’ve fished for hunted with, those who’ve blessed me with their challenge coins as I’ve encountered them on press junkets and in my travels, the many in the film industry working both in front of and behind the cameras,” Pratt concluded. “To those currently serving and those out thanks for your service. We appreciate you!”

It may be a day late, but I can’t think of a good reason why these men and women don’t deserve honor and respect every day of the year.