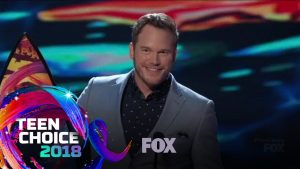 Saturday evening, some obscure TV writer that you probably haven’t heard of named Amy Berg decided to post up a little game on Twitter. She posted a quadrant of photographs featuring Chris Hemsworth, Chris Pratt, Chris Pine, and Chris Evans, captioning it with “one has to go.”

One has to go. pic.twitter.com/HUWnbQOA43

And this post, which doesn’t seem to have been posted to stir up controversy, resulted in the radical left piling on Chris Pratt for no apparent reason, claiming he’s homophobic and a Trump supporter, despite nary a claim by the actor himself stating such.

Because hey, the left doesn’t care about truth or facts. They believe everything posted on the Internet. This really goes a long, long way in proving the average IQ for a Democrat.

Dammit, I am literally just finding out that Chris Pratt is a trump supporter and I am so messed up behind that.

Me after I’ve been saying for years that Chris Pratt is a trump supporter and anti-lgbtq+ pic.twitter.com/UVGadz7emU

Me after I’ve been saying for years that Chris Pratt is a trump supporter and anti-lgbtq+ pic.twitter.com/UVGadz7emU

Pratt is open about his Christian faith but has not been overtly political in his public statements. Pratt told Men’s Fitness in 2017, “I don’t feel represented by either side. I really feel there’s common ground out there that’s missed because we focus on the things that separate us.” He was also photographed wearing a T-shirt emblazoned with the Gadsden flag, which was popular with many conservative groups.

The current attacks on Pratt for his conservative leanings are certainly not the first. Actress Ellen Page attacked Pratt in February 2019, tweeting that Pratt’s church was “infamously LBGTQ.” Pratt responded on Instagram, “It has recently been suggested that I belong to a church which ‘hates a certain group of people’ and is ‘infamously anti –LGBTQ.’ Nothing could be further from the truth. I go to a church that opens their doors to absolutely everyone.”

Pratt later pointed out after his divorce from his ex-wife Anna Faris, his church was not judgmental, writing:

Despite what the Bible says about divorce my church community was there for me every step of the way, never judging, just gracefully accompanying me on my walk. They helped me tremendously offering love and support. It is what I have seen them do for others on countless occasions regardless of sexual orientation, race or gender.

“My faith is important to me but no church defines me or my life and I am not spokesman for any church or any group of people,” Pratt continued. “My values define who I am. We need less hate in this world, not more. I am a man who believes that everyone is entitled to love who they want free from the judgment of their fellow man.” He concluded, “Jesus said, ‘I give you a new command, love one another.’ This is what guides me in my life. He is a God of Love, Acceptance and Forgiveness. Hate has no place in my or this world.”

This is how insanely stupid radical leftists are, ladies and gentlemen. They hate this man for being a Christian. That’s really what this is about. Radical leftists have lost their ever-loving minds.

Half the stuff they are saying about him isn’t even true. Not remotely. But none of these individuals are smart enough to do their own research to discover that for themselves.