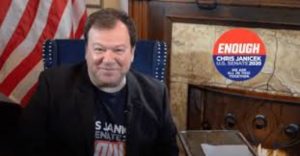 People do dumb things. That’s a fact no one who reads this blog needs spelled out for them, but sometimes the things you see folks do requires the expression of this truth out loud to help process things. Which is exactly what I needed after reading this, because it totally blew my mind.

Apparently, Sen. Ben Sasse’s Democratic opponent, Chris Janicek, sent a wildly inappropriate, sexually explicit text messages to his staffers in a group chat, which is leading a lot of his colleagues to ask him to step down.

Here’s more on this bizarre story via The Daily Caller:

The text messages, first obtained by the Associated Press, reportedly show Janicek was texting a group chat that included the female staffer. He asked the group chat if his campaign should spend money on “getting her laid.”

He also reportedly described a group sex scene involving the female staffer “in graphic detail,” according to AP.

“It will probably take three guys,” Janicek wrote. Shortly after he tried to say the comments were “a joke” and apologized for his comments. “I’m going on no sleep and a bunch of exuberant excitement and I think I was out of line,” he added.

As you probably imagine, the female staffer was not too happy about this and has stated she would no longer be working for Janicek’s campaign, nor supporting him in the senatorial race.

“You are my boss and a candidate running for Senate, (an) office held by just 100 Americans representing approximately 330 million of her people,” the female staffer fired back in her own text message. “There is zero tolerance for what you said.”

Janicek got slapped hard by the Democratic Party not long after the story broke, as they have now officially pulled support for his campaign and have stopped providing him with any monetary resources.

The Democratic candidate apparently stated that he apologized for the comments and assumed the whole incident would be kept private. In other words, he was hoping if he said sorry everyone would bury the whole thing and forget it happened.

Well, that was his first mistake. This is the age of the Internet and social media, the #MeToo era, and there’s no way this kind of perversion is going to be kept on the DL.

The right thing to do would be to get his name taken off the ballot and give up his campaign. He stands zero chance of winning now.