China And Russia Join Forces Against US In ‘No Limits’ Partnership 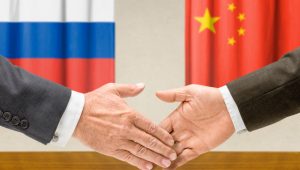 Russia and China have joined forces against the United States, announcing a new deep strategic alliance Friday to balance what they have portrayed as a malign global influence of America, as Chinese President Xi Jinping hosted Russian President Vladimir Putin during the opening day of the 2022 Beijing Winter Olympics.

In a joint statement, the two countries have affirmed that the new relationship they are entering into together is superior to any political or military alliance from the Cold War era.

“Friendship between the two States has no limits, there are no ‘forbidden’ areas of cooperation,” they stated, going on to announce plans to work together in several different areas including space, climate change, artificial intelligence and control of the Internet.

Russia and China Unite Against US in ‘No Limits’ Partnership

China and Russia proclaimed a deep strategic alliance on Friday to balance what they portrayed as the malign global influence of the United States as China’s President Xi Jinping hosted Russia’s Vladimir Putin on the opening day of the Beijing Winter Olympics.

In a joint statement, the two countries affirmed that their new relationship was superior to any political or military alliance of the Cold War era.

“Friendship between the two States has no limits, there are no ‘forbidden’ areas of cooperation,” they declared, announcing plans to work together in a host of areas including space, climate change, artificial intelligence and control of the Internet.

The agreement and its symbolic timing – at a China-hosted Olympics that the United States has subjected to a diplomatic boycott – marked the strongest evidence yet of how the two giant neighbors are cementing their ties at a time of deep tensions in their relations with Washington.

Each backed the other on key points at the heart of those tensions:

The two nations then went on to express their concern over “the advancement of U.S. plans to develop global missile defense and deploy its elements in various regions of the world, combined with capacity building of high-precision non-nuclear weapons for disarming strikes and other strategic objectives.”

“Elsewhere, without naming Washington, they criticized attempts by ‘certain states’ to establish global hegemony, fan confrontation and impose their own standards of democracy,” the Newsmax report stated.

In the arena of technology, both Russia and China have stated that they were ready to work together on artificial intelligence and information security.

The two countries then remarked that they believe “any attempts to limit their sovereign right to regulate national segments of the Internet and ensure their security are unacceptable.”

Hey, I seem to remember back during the 2012 presidential race that former President Barack Obama mocked Republicans for thinking Russia presented a threat to our national security in the post-Cold War era.