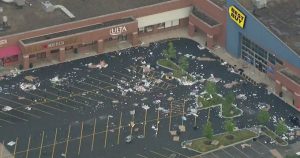 Videos hit the Internet following hours of violent rioting and looting that erupted on the streets of Chicago after a police-involved shooting just several hours prior.

Much of the activity occurred in the Magnificent Mile shopping district early on Monday morning.

Social media users posted videos of the chaos on various social media platforms that featured footage of stores like Nordstrom, Wallgreens, and Gucci being looted. At one point in the mayhem, police and looters exchanged gunfire, though no officers were reported injured in the incident.

Check out more from Fox News:

“Absolute chaos in downtown Chicago with more overnight looting and vandalism in the Loop,” tweeted Ryan Baker, an anchor for WBBM-TV. “Appears to be coordinated effort with minimal police presence.”

Looters broke into a Chicago mall and are looting the place clean tonight. #BlackLivesMatter pic.twitter.com/wKJZbcvpoZ

The Chicago Police Department did not immediately respond to an email from Fox News.

The unrest began Sunday afternoon, after police responded to a report of a man with a gun in the city’s Englewood neighborhood. While pursuing that individual on foot, he “turned and fired shots” at officers before being struck himself and taken to a local hospital, Deputy Chief Delonda Tally told Fox 32 Chicago. A crowd that had gathered at the scene then faced off against police and started hurling objects at officers after getting agitated over a false rumor that the suspect – who is in his late teens or early 20s – was a child, investigators add.

Offender’s firearm recovered by police after firing at Officers. Officers returned fire striking the offender. Offender transported to U of C Hospital. pic.twitter.com/UQPmfP3a35

As of this writing, the condition of the suspect involved in the initial incident isn’t known. The Chicago Civilian Office of Police Accountability has opened up an investigation into the shooting. Three officers involved in the situation were transported to the hospital for observation.

Folks, this rioting and looting stuff has got to stop. We’ve got to come together as Americans. We simply cannot allow ourselves to continue being manipulated by the falsehoods of the mainstream media regarding topics like race. It’s destroying our country.

Individuals on both sides of this issue need to take personal responsibility for their own actions. Each needs to care about the other, otherwise this insanity is never going to end and this country won’t survive.