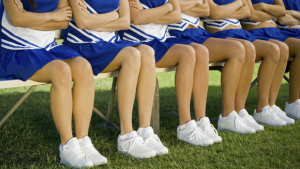 This was bound to happen sooner or later.

While most people think of cheerleaders as being picked exclusively for their physical attractiveness, as the classic high school movie stereotype goes, the time-honored tradition of cheerleading in American sports is actually a sport all of its own.

It’s not all shaking pom poms and looking pretty–the dance routines and performance techniques do require a distinct level of athleticism and skill, and, as with anything else competitive in high school or in life, not everyone is up or qualified for the challenge.

But of course, it’s 2018, so rather than teach children the valuable lesson that you don’t always get what you work for if there is someone more qualified ahead of you, a New Jersey school board has decided to just let everyone be a cheerleader.

Hurt feelings are the ultimate trump card in the era of snowflakery.

“After one New Jersey student didn’t make the cheerleading team at her high school, her mom complained to the school board, which forced the school to abandon its ‘exclusionary’ tryout program and place every interested student on the cheer squad,” the Daily Wire’s Emily Zannoti reports.

“A parent whose daughter failed to qualify for the team approached Hanover Park High Schools cheer coaches and the school board, who came up with what they thought was a solution that made sense: either disband the team or eliminate the tryout process and let everyone who wants to be a cheerleader be a cheerleader,” she explains.

Apparently, after the complaint of one mother, the school board threatened to disband the 10-member cheerleading team rather than maintain the tryout policy.

This of course, rightly upset the young ladies who had worked hard to become adequately qualified to make the team, and a group of them confronted the board on their effort being undermined so significantly.

“All my hard work has been thrown out the window,” one cheerleader told the board. “I tried my hardest. Now everything is going away because of one child who did not make the team, and their parent complained.”

“I came up here to state that I did not put in 18 months of work to lead up to this moment, just to be told it didn’t matter anymore,” said another.

The Hanover School District would not be moved, though, because to protect the delicate feelings of one student whose mommy complained is clearly far more important that teaching young women the importance of competition and hard work.

“In order to facilitate a more inclusive program, the alignment between the various cheerleading squads would be modified to allow all interested students to be able to participate. This decision was made in the best interest of all students and was made to be as inclusive as possible,” they said in a statement, explaining they would stand by their decision to allow everyone who tried out for the squad to be on the team.

There’s no two ways about this: we are absolutely failing our children if we teach them that you can simply complain and get whatever you want in life. We are literally teaching them to be bratty, and not only will they be wholly unpleasant adults, ill-equipped to deal with the real world, they will ultimately never be satisfied in life because there is simply no amount of complaints one can make that will change the fact that there’s a big, hard, cold world out there that doesn’t care about your feelings one bit when push comes to shove.

Stop coddling your kids and let them learn to accept disappointment and defeat–that’s one of the best lessons you can teach them.